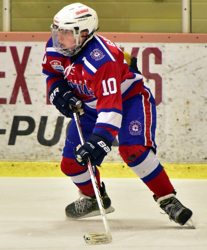 Colonials captain Alex Gaffney did it all Sunday. He assisted on New Jersey’s first goal, scored two of his own later and then blocked two shots during a frantic Little Caesars push for an equalizer in the final minute. It all added up to a thrilling 3-2 semifinal triumph for New Jersey (3-0-1).

“I try to block ‘em at the most critical times,” said the 5-foot-7 dynamo.

He also scores ‘em at the most critical times, or at least he did Sunday, breaking a 2-2 tie with two minutes remaining in the third period. It was a largely solo effort for the left-shooting forward, who collected a pass in the neutral zone, zipped up the left-wing boards and blasted a slap shot over Cullen DeYoung’s left shoulder.

“I saw a little space over there, but it was just instinct to shoot it far side,” said Gaffney, who leads the tournament with six goals and 10 points.

The rocket doomed Little Caesars (3-1-0), which battled back valiantly from a 2-0 deficit with a second-period goal from Tanner Kelly and third-period tally from Carter Mazur. But Gaffney’s second goal extinguished the momentum and propelled his Colonials into tomorrow’s championship game against Chicago Mission, an opponent they’ve faced three times this season. New Jersey won the first of those matchups, but Mission claimed the next two. The teams’ fourth and final meeting will decide USA Hockey’s Youth Tier I 14U national champion. 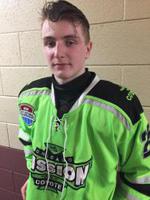 After surrendering a mere three goals in three tournament games, Chicago Mission was finally pushed to the limit Sunday. Syracuse dented Chicago’s twine 12 seconds into the teams’ semifinal matchup, then the Nationals added three more goals in the second period, making it look like Mission might enter the third period facing a deficit for the first time at USA Hockey’s 2017 Youth Tier I 14U Nationals.

Then Wyatt Schingoethe restored order for top-ranked Mission (4-0). The University of Notre Dame prospect corralled a great pass from Gerard Keane, split the Syracuse defense and scored a gorgeous goal with 6 seconds remaining in the second period to knot the score 4-4. Then, fewer than 90 seconds into the third period, Schingoethe roared up the left side, swooped behind the Nationals’ net and slipped a pass that Jacob Perreault converted into the eventual game-winning goal in a 5-4 Mission victory.

“I felt like all the D were on me and went with me, so I figured there had to be someone open out front and it worked out,” said Schingoethe of his play-making.

It was the culmination of a do-anything kind of game for the Chicago center, who came into the day determined to pay any price for a shot at tomorrow’s championship game. Asked what was said between the second and third periods, Schingoethe said, “Just that this was our season and that we weren’t gonna let it get away.”