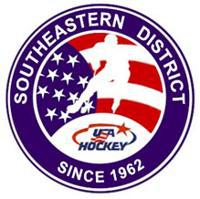 The self-proclaimed Hockey Capital of the South lived up to its nickname March 16-19.

The Rocket City served as host for the 2017 USA Hockey Youth Tier I Southeastern District Tournament. The four age divisions — 14U, 15, 16U and 18U — had four teams apiece. Winners advanced to the USA Hockey National Championships, scheduled for April 6-10. Players in the 14U and 15-year-old classifications head to Scottsdale, Arizona, while Pittsburgh, Pennsylvania, will host the 16U and 18U tournaments.

Teams comprised mostly of boys converged on the Benton H. Wilcoxon Municipal Ice Complex for the competition. But among them was one girl, center Lacey Eden of the 14U Washington Little Capitals, a top talent in her own right, competing for a USA Hockey Model Association.

“It’s amazing. I love it,” Eden, 14, said of the tournament. “It’s really fun, especially the speed of the game. It’s so much faster.”

Her mom and dad drive her from their home in Annapolis, Maryland, to the Little Caps practices in Arlington, Virginia. She has been playing hockey since she was 4.

“This is my main team. I [also] played in a couple of girls tournaments,” Eden said.

She already has an offer from Northeastern University for women’s hockey. And she has visited the University of Wisconsin, a school she hopes to hear from after USA Hockey Nationals. Besides her sport of choice, she is ranked nationally in track for the 1,500 meters in her age group by the USA Track & Field. She has won titles in the 3,000 and 1,500.

Eden and the Little Caps won the 14U division by beating Thunder Hockey from Decatur, Alabama, 3–2 in overtime on Sunday.

Aidan Flynn scored two goals and Josh Silverman had one for the Thunder out of Decatur, Alabama, in a 3-1 tournament-opening win over the Little Caps. Goalie Alec DeVries made 12 saves.

“It was a close game and then, in the third period, we kind of took control of the game and scored two goals and won 3-1,” Thunder coach Keith Rowe said. “It was 1-1 going into the third.”

Other key players for the Thunder include forward Byron Merrill and defenseman Stephen Davis. The Thunder got another win that night by beating the Junior Hurricanes, from Raleigh, North Carolina, 4-1. Merrill scored two goals and Josh Steele-Weintraub and Justin Jineant added one apiece. Goalie Bennett Jung made 21 saves.

In 15-year-old action on March 17, the Junior Hurricanes beat Team Maryland, 3-2, and the Washington Little Caps blanked the Thunder 3-0.

Alex Straughn scored the winning goal for the Junior Hurricanes with 41 seconds left. They also received goals from Garrett Auriene and Devin Phillips. Goalie David Blue made 21 saves as the team from Raleigh improved to 30-8-6. Defenseman Robert Cicciari was also a key player.

Will Rosen and Max Romeo scored for Maryland while goalie Andrew Takacs made 22 saves. The team from Rockville fell to 18-30-5. Key players also include their other goalie Dom Basse, forward Tyler Crist and defenseman Hunter Band.

“We played good. We got better as we went along. So we’ll be better toward the end of the tournament than we are right now.”

In the 15s Little Caps win over the Thunder, goals came from Reid Leibold, Ethan Privman and Frankie Megan. Goalie Connor Leslie made nine saves for the shutout as the Little Caps improved to 33-13-1-2, including one tie and two overtime losses. Other key players for the Washington team include right wing Adam Varga, left wing Mac Robertson, center Owen Morgan and defenseman Bobby Starring, the team captain.

“It’s kind of a grinding win,” Little Caps coach Doug Plocki said. “[The Thunder] has a very good team and they battled hard. I thought their goaltending was really outstanding. We really had to work to get pucks past him.”

Thunder goalie Synjen Amende made 24 saves as his team fell to 25-24-3. Their other key players include left wing Justin Knapp and defenseman Davis Goukler.

The Thunder subsequently posted a win and a loss the rest of the way. The Little Caps won the title 4-2 over the Junior Hurricanes.

In 16U play March 17, the Tampa Scorpions beat Team Carolina 4-2 and the Washington Little Caps blanked the Thunder 2-0.

Carolina got goals from Luc Cote and Connor Thomas while goalie Griffin Hunt made 29 saves.

Thunder goaltender Logan Stein made 17 saves in the loss.

In the 16U final against the Little Caps, the Scorpions’ Eric Thompson scored two goals and Marcus Alfaro made 12 saves. Stepan Pokorny, Dayton Collins and Carson Laport also scored for Tampa in the 5-2 win.

“We just dug deep,” said Collins, a 16-year-old center. “We had 100 practices, 50-something games and we just dug deep. I think there’s something else. There’s a big passion for us. And we just wanted to win this game to go on.”

Scorpions Again in 18U

“We had a good start,” Scorpions coach Vinny Prospal said. “We had a really good first period. We kept going at them. I think the boys got rewarded for how hard they were playing. And the score indicated what they were doing out on the ice.”

Maryland got a goal from Denis Kuzminov and 31 saves from goalie Ben Calaman. The team from Rockville fell to 17-24-1. Their other key players included forward Devin Lowe and defenseman Jack Brotman.

Maryland coach Christopher Ceransky acknowledged that his club knew they’d be facing a tough test coming into the game.

“We respected them. We just weren’t willing to work hard enough in the first part of the game. I think we have to be a team with a short memory right now.”

Drew Lorinchak scored a power-play goal at 3:20 in overtime to lift the Little Caps over the Thunder on Friday afternoon. Washington also got goals from Brian Middledorf, Cole McDowell, Griffin Long and Mitchell Rebholz in the 5-4 win. As the Little Caps earned a split in their first two games, forward Gilman Everitt also contributed. They are coached by Lyon Messier, son of hockey great Mark Messier.

In the 18U final, Brock Hoffman’s goal lifted the Scorpions over the Little Caps in the second OT. Tampa also got goals from Hunter Connley, Nathan Smith, Robbie Eichelberger and Seth Cohen in the 5-4 win. Ryan Nussbaum made 28 saves.

“I’m excited,” Collins said of his team’s upcoming Nationals trip to Pittsburgh. “We’re playing against the best of the best.”