Semifinals determined at both age divisions 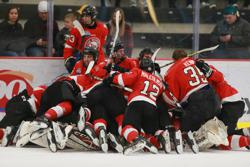 That well-worn adage was seconds away from coming to fruition in this year’s Tier I tournament in Pittsburgh when a determined Team Wisconsin changed the script with a dramatic 3-2 overtime victory to punch its ticket to the 18 & Under title game.

Shattuck will still make its presence felt on Championship Monday when it takes on Compuware in the 16 & Under title game at the UPMC Lemieux Sports Center.

Compuware continued to live up to its top billing as the No. 1 seed in the tournament as they took care of business against their long-time Michigan rivals from Honeybaked to put themselves in position to win its first 16 & Under title since 2009.

“We’ve played [Honeybaked] eight times and every game has just been a battle,” said Compuware head coach Pat Peake. “They’re so well coached and have such good structure. They’re difficult to play against. We have a lot of character in our room and today our boys just found a way.”

After a scoreless first period, a string of Compuware penalties helped tilt the ice in Honeybaked’s favor. It also led to the first Compuware goal when a mental lapse led to a 2-on-1 break, and Reginald Millette made sure he didn’t miss his mark on a feed from Ryan Lautenbach.

Antonio Venuto’s power-play goal in the third period provided more than enough insurance for Blake Pietila, who stopped all 18 shots that Honeybaked threw his way, including several from close range.

After surrendering four goals on 16 shots against the Central Connecticut Capitals Selects on Friday, Pietila was pulled for Chase Johnson, who stepped in to notch a shutout in his next game. Still, the Compuware coaches had more than enough confidence in their young goaltender to put him back in the crease with their national championship hopes on the line.

“He has been outstanding all year. He was pulled the other day and that raised a lot of questions,” Peake said. “There wasn’t even a second thought of what we were going to do. We know what the kid is about. He’s the hardest working kid in practice, he’s the last kid off the ice. He’s a competitor and his teammates love him. We knew that he was going to be outstanding and you saw the outcome out there today.”

In another matchup of familiar foes, the Omaha AAA held a slight advantage in their season series against Shattuck. Yet it was the two-time defending champs who came out firing on all cylinders, keeping Omaha defenders on their toes throughout the contest.

Shattuck opened the scoring at the 12:30 mark of the first period when Robert Mastrosimone gathered his own rebound and made the most of his opportunity beating Jacob Sibell five hole for his third goal of the tournament.

Omaha seemed to get the equalizer in the second period when Sam Renlund bullrushed around the Shattuck defense and power the puck past Derek Mullahy, but the officials ruled that the net was off its moorings before the puck crossed the line.

That turn of fate seemed to energize Shattuck as John Farinacci’s long outlet pass sprung Grant Silianoff and McKade Webster on a 2-on-0. A perfect return feed from Webster left Silianoff staring at an open net and he didn’t miss.

Webster would return to the scoresheet with his second helper of the game followed by an insurance goal in the third to put the game out of reach.

It was an impressive outing for a team that is looking to win its third consecutive 16 & Under title. And from what he saw today, head coach Mark Abalan likes his team’s chances.

“That was our team today, that’s what we’re about. We were at the top of our game, and the top of our game is pretty good,” Abalan said. “It's going to take the other team to play pretty unbelievable to beat us when we’re playing like we did today.

“If we have one more like that in us than I love our chances tomorrow.”

Any chance of a Shattuck sweep was dashed by a spunky Team Wisconsin team that wasn’t about to go quietly.

Ian Malcolmson’s goal with 22 seconds left in regulation set the stage for Cole Caufield’s overtime heroics as Team Wisconsin won the rubber match of their season series with Shattuck.

Samuel Stevens’ second-period goal gave Shattuck its second lead of the game, and Vince Shonka looked poised to make it stand up down the stretch.

With 22 seconds left, Wisconsin head coach Luke Strand called timeout and drew up a play. All that was left was for his team to execute it, which they did to perfection.

Off the draw, Jordan Steinmetz took pass from Caufield and quickly gained the offensive zone. With seconds ticking down he fed Malcolmson with a perfect pass in the slot and the Waukesha, Wis., native made sure he didn’t miss.

“I’m a fan of trying to gain the zone as fast as you can and then try to flood the middle as hard as you can, and both things happened on that play,” Strand said. “It’s a fortunate situation for us, unfortunate for a great Shattuck team.”

That set the stage for Caufield to shine in the extra session. With Wisconsin pressing, an Aaron Grounds’ shot took a funny bounce off the boards and came back to him. His no-look pass hit Caufield in stride and the dynamic forward made no mistake.

“We put it all on the line from the start of the game,” Caufield said afterward. “It didn’t go our way in the first two periods but we battled in the third, kept our shifts short and I think we outworked them the whole game. It happened to go our way and we took advantage of it.”

For a split-season roster featuring players from seven different prep schools, the Mid-Fairfield Chiefs are as cohesive unit as any team in the tournament. That’s due to great coaching and a group of players who have never let distance stand in the way of their tight bonds.

Head coach Shawn Conner and crew had two weeks to get ready for the tournament and the Chiefs made the most of their time together. They found their legs in a shootout win over the Colorado Thunderbirds and took another step in the right direction with a win over the Pittsburgh Penguins Elite and hit their stride as they shut out a tough Oakland Jr. Grizzlies squad.

Against a disciplined Culver team, the time away was a distant memory as third-period goals from Jack Flanagan and Tommy Tanner provided goaltender Strauss Mann with more than enough offensive support.

More than just a 29-save effort by his goaltender, Conner was quick to point out that it was a total team effort that punched the Chiefs’ ticket to Monday’s title game.

“Our boys sold out the entire game. We have a great goaltender and our boys ate pucks constantly and blocked shots and really sold out,” Conner said.

“Even though they’re a split-season team, these guys really came together. They love each other, they play for each other and they sell out for each other. They’re an absolutely amazing group of kids.”