In the early 1960s, USA Hockey expanded its menu of youth national tournaments to serve a growing player pool in need of fresh opportunities. One of the new tournaments, launched at the Broadmoor World Arena in 1960, was designed largely as a showcase for 15-year-olds. It was a concept whose time had come, and for almost a decade, it served the purpose. Then a new wave of change shuffled 16-year-olds into the event, making it the precursor to today’s 16-and-under classification.

But for 15-year-olds, the original incarnation of USA Hockey’s then-Midget National Championships was fun while it lasted. 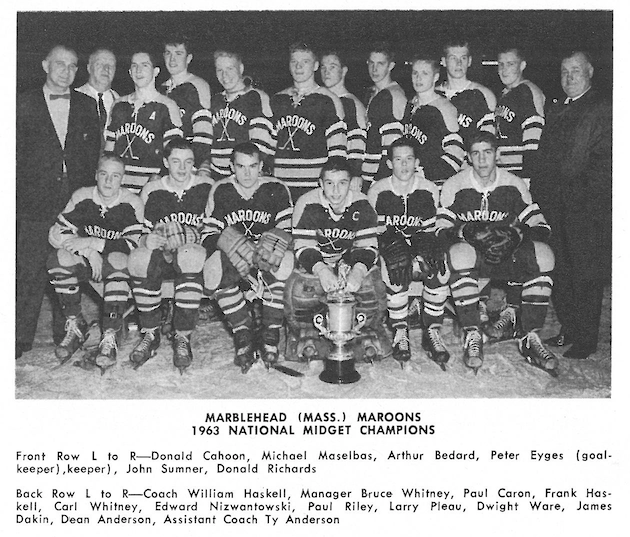 “Playing in the national championship was quite an experience, especially to win. I remember we all got coats – Marblehead Maroons coats,” said Larry Pleau, who helped lead his Massachusetts team to the national championship in 1963. “It was the first time I ever flew in an airplane. The Nationals experience, you didn’t realize how special it was at the time. Now you look back and realize how great it was. You wish you could go back and relive it, but you can’t.”

For Pleau, it was a springboard to even greater success. Five seasons later, he became a United States Olympian, finishing as Team USA’s second-leading scorer at the Grenoble Winter Games. Next came 10 seasons in the NHL and WHA with Montreal and New England. Then, after coaching the Hartford Whalers in the early 1980s, he moved into general manager duties that helped produce a Stanley Cup with the New York Rangers in 1994 and a silver medal with Team USA at the 2002 Winter Olympics.

For Pleau, a U.S. Hockey Hall of Fame inductee, it all started in his native Massachusetts, and his 15-year-old season stands as a pivotal time in what became a storied career.

“(At that age), sometimes kids aren’t quite ready to go to the next level,” said Pleau. “It works in reverse for them, whereas, playing another year at their own age level helps their development.”

And proving that sometimes what’s old is new, USA Hockey is going back to the future in 2017 with the debut of a pilot-program national championship tournament exclusively for 15-year-olds. The rationale echoes Pleau’s sentiments about it being a pivotal time in a player’s development, a stage perhaps best served by an age-specific regular season of competition and a national tournament dedicated to 15-year-olds.

“It’ll definitely be a good thing for those players,” said Pleau. “Instead of being the younger guy on the bench watching the older guys play in all the key situations, by playing at their own age level, they get to be out there playing in those situations. That’ll be great for them. It’ll be another year of organized development at their own age level. Kids aren’t always ready to be pushed to the next level. There will always be some who are, but they’re the exceptions.”

The net result is an improved player-development pathway with fewer maturity gaps; a pathway that expands and retains the talent pool and helps offset the relative age effect for players born later in the calendar year.

“Having that stage for development before jumping into 16U, right in the heart of adolescences, it’s really a confidence-building year,” said Scott Paluch, USA Hockey American Development Model regional manager.

Paluch, who guided a team of American 15-year-olds to gold at the 2016 Youth Olympic Games, works extensively with players in the 14-, 15- and 16-year-old age groups, and what he sees is that players excelling at 16U are a bit more physically mature and mentally confident. That edge, particularly in these specific years of adolescent development, puts many 15-year-olds at a significant disadvantage, one that can stunt their growth at a critical time.

“With this classification, now a 15-year-old can still be a dominant hockey player, have the puck more and play in key situations – power play, penalty kill, late in close games – throughout a hockey season, rather than being relegated to a lesser role on a 16U team,” said Paluch. “Now they can have one more year for physical maturation to complement another year of being able to execute skills and hockey decisions within their age group.

“There will still be some players in that age group who will play 16U, but now a whole other group will be able to stay longer and be immersed in that development culture for another season.”

The benefits stretched nationwide this season. Sixteen teams qualified for USA Hockey’s Youth Tier I 15-year-old Nationals, but dozens more throughout the country shared in the movement, providing an extra year of critical skill development, physical development and emotional development for budding athletes who might have otherwise gone without.

“Some of those 15-year-old players, under the previous format, wouldn’t have gotten the opportunity to play 16U AAA hockey because they would have been cut and maybe fallen out of the program or stopped playing altogether,” said Ed Gingher, Ohio AAA Blue Jackets hockey director. “These are good players; players who have potential to become college or professional players, but at 15, they just weren’t quite advanced enough in their physical development to compete consistently with top 16-year-olds. By having a 15-year-old national championship, it gives them extended time to develop and preserve their options.”

Gingher’s program includes a single birth-year 15-year-old team, as does the HoneyBaked program in nearby Michigan. The coach of that team, Lou Melone, has coached various age groups through the years and he sees the dramatic changes that occur in players between the ages of 14 and 16.

“The most notable has been the rapid cognitive development, and it’s been fascinating to watch it transform both the players and the game environment,” said Melone. “In prior years, players were separated by the developmental stage of their physical skill-set, which was largely driven by when they hit puberty. In many cases, the ones who had the competitive edge were simply those who were the early developers. The bad side of that is players who relied primarily on their physical dominance and didn’t continue to work on becoming a complete player and honing puck skills, skating and decision-making. They ended up struggling to keep up once the later developers caught up physically.”

USA Hockey’s addition of a national championship tournament for 15-year-olds will help mitigate those maturity gaps and keep the focus on consistent age-appropriate skill development throughout adolescence.

“The 15-year-old classification has been an outstanding idea from a development point of view,” said Doug Plocki, head coach of the Nationals-bound Washington Little Caps, a USA Hockey Model Association. “The real benefit is that it gives players who might otherwise get lost on a mixed birth-year team the opportunity to play top-six minutes, power-play and penalty-kill roles – roles they wouldn’t necessarily get to play on a mixed birth-year team. It gives them another year to develop in a comfortable setting. It’s extended the careers of several players. From a development standpoint, it’s been outstanding.”