PLYMOUTH, Minn. – The Minneapolis suburbs have become a home away from home for the Eagles of Rancho Santa Margarita, California.

Coached by Minnesota native and 1994 United States Olympian Craig Johnson, they migrate annually to the North Star State where they compete at the Wayzata (Minn.) Youth Hockey Association’s Junior Gold Tournament and sometimes sample the delights of Minnesota’s outdoor hockey scene as well.

So the Eagles were back on familiar ice and facing a familiar foe Friday during USA Hockey’s 2018 High School National Championship Tournament, held at Wayzata’s home arena. Santa Margarita senior Kevin Peck, a veteran of three such showdowns, knew what to expect and figured heavily in the outcome, scoring what stood as the game-winning goal in a 7-4 victory over the host Trojans.

“It was a pretty clean faceoff win and I saw the top right corner was open,” said the lefty-shooting defenseman. “I had a lot of time to walk in and pick my corner.”

Despite Santa Margarita eventually amassing a four-goal lead in the contest, there was little doubt on the Eagles’ bench that a Wayzata push was coming.

“We knew it would be a close game,” said Peck. “They weren’t going to give up. They showed their heart and they played for their home, especially in the third period.”

Wayzata scored twice in the third, but Santa Margarita weathered the storm to remain undefeated and set up a showdown for what is now an aerie title game tomorrow with the also-unbeaten Eagles of Suburban Denver.

“I’ve seen four periods of them at this tournament and they’re clearly well-coached and they play with a lot of speed,” said Coach Johnson of his Saturday-evening opponent from Colorado. “We’ll have our hands full and we’ll need our best effort.” 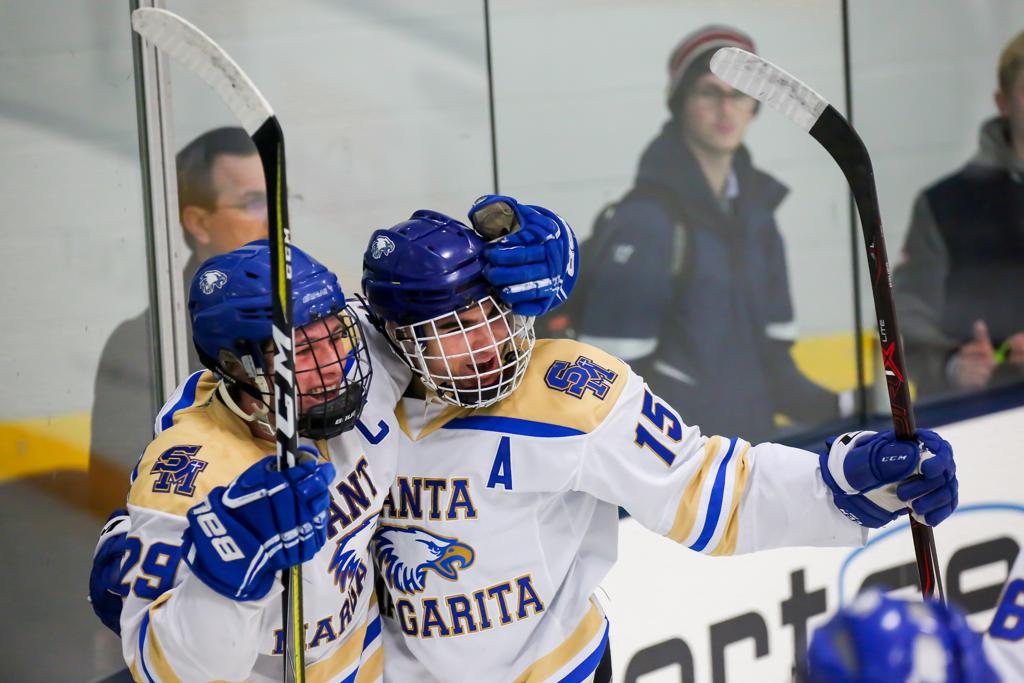 Stoneman Douglas (Florida) 3, Edina Hornets Junior Gold (Minnesota) 13 – Edina High School boasts one of the deepest player pools in a state already deeper than most. That expanse of talent was on full display Friday in a 13-3 victory over Stoneman Douglas in which Edina's Junior Gold team amassed a 58-15 edge in shots. Stephen Doll (2G, 4A) led the attack for Edina, which received goals from eight players including Hunter Williamson, grandson of two-time United States Olympic Men's Hockey Team head coach Murray Williamson, a silver medalist and U.S. Hockey Hall of Famer.

"It's kind of nice to have those guys around if you need coaching tips," quipped longtime Edina coach Bill Smith, who needs few tips after helping guide the school's Junior Gold program since 1988.

Eagles (Colorado) 5, Edwardsville Tigers (Illinois) 2 – Eagles defenseman Cole Cavey scored twice and captain Luke Wheeler added a goal and three assists to pace the undefeated suburban Denver entry in a 5-2 triumph over Edwardsville, which fell to 0-2 in the Division I USA Pool.

"The third period was rough with the penalties," said Barrick-Benson. "It was a one-goal game, so there was a lot of tension, and it seemed like both teams fed off that and it led to more aggressive play."

The action suited Barrick-Benson, who shared her high school team's goaltending duties during the regular season. Here at Nationals, she's happily the lone goalie on the roster for Premier Prep Black.

"I like it because it's faster paced, all of it, both the play on the ice and playing games every day, which is really nice," said Barrick-Benson. "I love it."

Allison Corser-James scored twice for Monarch, which fell to 1-1 in pool play.