PLYMOUTH, Minn. – With the final seconds ticking down, the play seemed as if in slow motion. Santa Margarita (California) High School trailed by one and gathered the puck behind its net with 12 seconds left.

The puck bounced over the stick of a player from Regit Jesuit (Colorado) at center ice and found its way to Santa Margarita forward Brendan Williams. Williams raced to the net, passed across and found Joseph Felicicchia on the back side.

Felicicchia roofed a tying goal with 2 seconds remaining in regulation.

From there, an Eagles victory seemed destined.

“I could see the puck fluttering,” said Santa Margarita coach Craig Johnson. “So I said to the puck, ‘please bounce’ and it bounced over their guy’s stick. It landed on Williams’ stick and he made a great play in the zone.

“It’s a hard shot because you’re on your off side, so the pass has to be perfect. If the pass isn’t perfect, that’s probably not a goal, and the pass is right where he can one-time it, and Joey makes a great shot.”

Leevi Selanne, son of Hockey Hall of Famer Teemu Selanne, scored a power-play goal in overtime, with assists from Williams and Ryan Johnson, and the Eagles won the Division 1 title 3-2 against Regis Jesuit (Colorado) at the 2018 Chipotle-USA Hockey High School Nationals in Plymouth, Minnesota.

Williams had three assists in the game, including primary assists on the tying and winning goals. Felicicchia added an assist and John Mulvihill II had the other goal for Santa Margarita, which won its second USA Hockey high school national championship. Fred Taylor made 12 saves in goal.

“We found a way at the end, whether it was a lucky bounce, which it was, but I thought through the game we deserved some good fortunes,” said Johnson, a Minnesota-born former NHL player and University of Minnesota Golden Gopher.

“The scoring play just seemed like fate was involved because there’s just absolutely no other way to describe,” Regis Jesuit coach Dan Woodley said. “The puck is bouncing at center. It bounces right over our kids’ shin pad and stick, and then they hit a player right in stride who snaps it in the corner. It was like there was some fate involved. Maybe that was because they had controlled a major portion of the game.”

“I know how it felt to lose,” Felicicchia said. “It’s been sitting with me ever since to right now.”

The feeling is much better now after his improbable goal.

Regis Jesuit scored twice in the second period to take the lead and tried to hold on. Regis Jesuit sent the puck down behind the Eagles’ goal in the final seconds with Santa Margarita having pulled its goaltender.

Then Williams made the play that will be remembered in California and beyond.

“I looked at the clock and I see 10 seconds,” Williams said. “I’m like, ‘Alright, I have to make something happen quick. …I did a backhand sauce and I looked to my right and it’s Joey. I just see him score. I look back at the clock and see two seconds and I almost started crying. I was in shock.”

Johnson tried to calm his excited team and Santa Margarita won in overtime as Williams saw Selanne on the back side of the play all alone and sent a cross-ice pass to him.

But not as surprised as everyone in attendance was at the end of regulation, when Santa Margarita embarked on its improbable championship-winning rally. 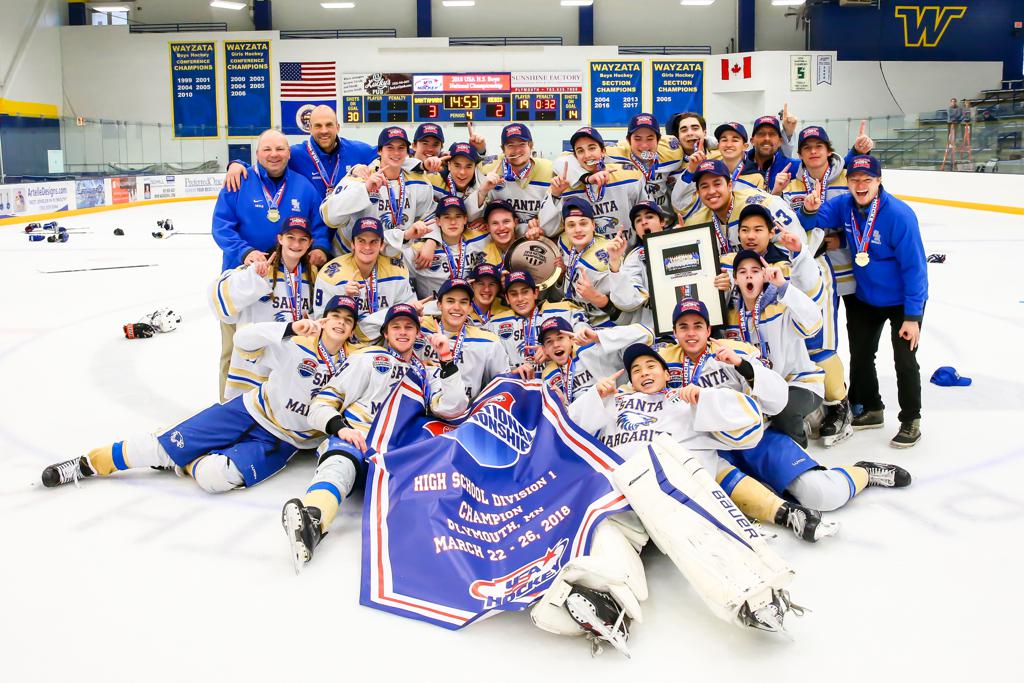