Catch all the action from West Chester, Pennsylvania

WEST CHESTER - When Honeybaked head coach Jason Deskins saw that his team would be playing Shattuck St. Mary’s in the first game of the USA Hockey National Championships, he admitted he was a bit worried.

It turned out to be all for naught, as a two-goal third period led his team to a 3-2 victory on Thursday in their Tier I 16U tournament opener.

Despite falling behind 1-0 and 2-1, Honeybaked found a way on both occasions to score an equalizer, and eventually, notched the game winner.

With 3:31 remaining in the game, defenseman Jack Hillman received a pass from forward Dylan Wendt and rifled a shot past Shattuck goalie Carsen Stokes to take the lead for good. Three minutes and nine seconds prior, Honeybaked tallied the tying goal on a power play courtesy of Sahil Panwar with helpers recorded by Davis Pennington and Kristoff Papp.

“The kids actually came in after a slow start from coming into town and traveling, I think we were a little behind the eight ball to start,” Deskins said. “The third period they picked it up, some of our top end guys really made some plays there and obviously our power play got one to tie it which was huge for us.”

After Mackie Samoskevich gave Shattuck a 2-1 lead, the message on the Honeybaked bench was simple: just keep going.

“We honestly thought we had outplayed them in the second, we outplayed in the third up to that point,” Deskins said. “We felt that if we kept pushing that our depth would come up big for us and it did.”

In net for Honeybaked was Xavier Medina, who came up with several clutch stops throughout the game and finishing with 29 on the day. Besides the Samoskevich goal, Medina's only other blemish came in the first period on a Shattuck goal scored by David Nesburg.

Medina acknowledged the importance of not being phased by allowing a goal.

“You gotta have a short term memory as a goalie, so you gotta look at the next puck and forget about the last one,” he said.

“I thought he was great, especially early in the game there. I think at one point the shots on goal were 15-2 or 15-3 for Shattuck and he made a couple huge saves,” Deskins added.

“He actually made a big time breakaway save on a shorthanded effort by them in the second which I think gave our guys some energy, we came back and scored quickly after that.”

In a tournament full of high-caliber teams, Deskins called picking up a win in the first game “huge.”

“Give credit to Shattuck I thought they played extremely well today,” he said. They were prepared to play, and our kids kind of fought through it, we found a way to get it done even though it wasn’t pretty.” 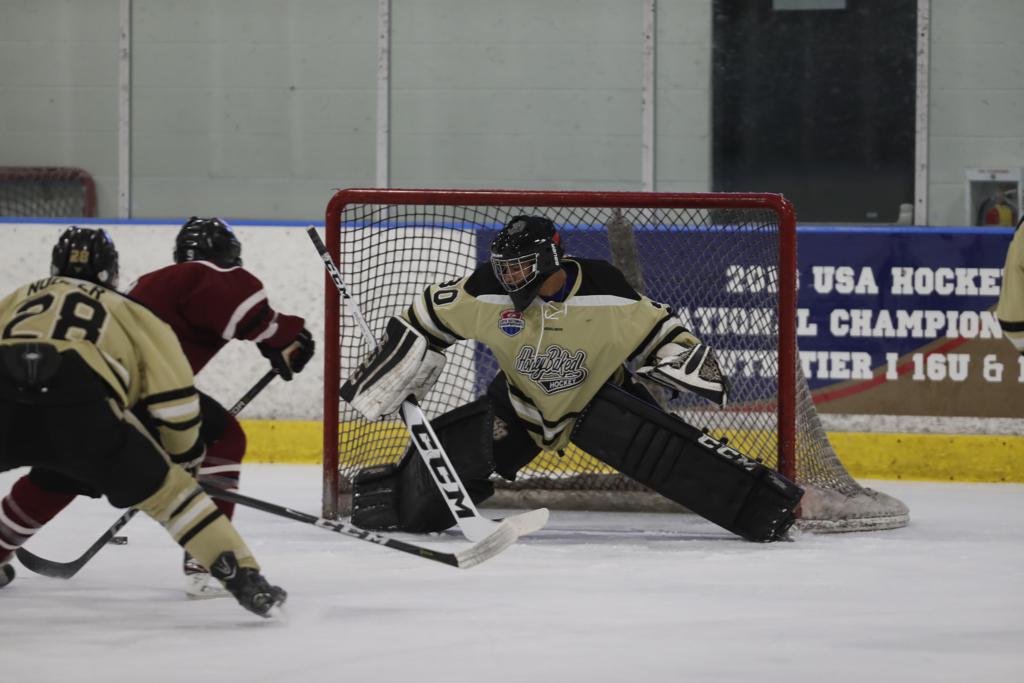 Xavier Medina of HoneyBaked extends his pad to make a save during the first day at the USA Hockey Tier I 16U tournament on Thursday. (Photo by Carmo Photography)

A four-goal second stanza led Little Caesars to a dramatic victory over the Avalanche, despite a three-goal final period from NJ. Antonio Stranges recorded four points (two goals, two assists) for LC, and Jacob Cook added two goals of his own. Lewis Rowan and Ethan Szmagaj scored the other two for Caesars. Christian Sarlo scored two for the Avalanche in the third period, with Dylan Robbins, Travis Treloar and Alexandros Gaffney adding the others.

Jack Cronin scored a hat trick for the Eagles, and Derek Mullahy secured the shutout in net in the victory over Esmark. Sasha Teleguine, Chase McInnis, Robert Lapsley, Mike Brown and Brian Carabas recorded the other five goals for Boston. Craig Perry made 37 saves in goal for the Stars.

Two goals a piece for Joseph Harjuindeguy and Dalton Garcia highlighted the Ducks' victory over Chicago. Joshua Groll and Benjamin Biester were responsible for the other two Anaheim scores, while Joe Rascia scored the lone goal for the Young Americans.

Two third period goals from Mitchell Smith and Joseph Teasdale gave the Grizzlies a come-from-behind victory over Dallas on Thursday. Ryan Robinson scored the only goal for the Stars in the second period. Oakland goalie Logan Stein made 25 saves, while Alex Proctor saved 26 shots.

Two Wisconsin players combined for five goals, highlighted by a Cade Lemmer hat trick. Mason McCormick scored two of his own, and was joined by Jake Schmaltz, Cole Danielson, Casey Roepke, Frank Dovorany and Drake Baldwin in the goal column. The lone goals for the Stampede were recorded by Brett Reed and Nickolas Robinson.