Catch all the action from West Chester, Pennsylvania

WEST CHESTER – There are a lot of problems that can present themselves to the head coach of a youth hockey team.

For Mid Fairfield Rangers head coach Chris Gragnano, his biggest ‘problem’ isn’t exactly a bad one to have.

With his team’s offensive firepower on full display in an 8-4 victory over the Anaheim Jr. Ducks in their first game of the USA Hockey Tier I 18U Youth National Championships, seven Rangers tallied a goal and 11 recorded a point.

“It’s a luxury but it’s also one of those things where you can overlook it, you can find yourself thinking about which combo is gonna be up next and which combo is gonna give you the most success right away,” Gragnano said.”We’re fortunate enough where I can put anyone out there and anybody is capable of doing it, which is a great problem to have and I wouldn’t trade it for any other problem standing behind the bench.”

After heading into the first intermission knotted at one, the Rangers exploded for five goals in the second period, two of which came from Matt Holmes.

“I got set up pretty nice on both of them and I just had to bear down and finish them away,” Holmes said. “As the game was going on and we got more touches and got more comfortable.”

Gragnano added: “Once we got the first one to drop, you could kind of feel it among the guys. They felt more comfortable and at a 1-1 game they felt good about where we were at and you could just start to feel them press a little bit harder and not grip their sticks so tight.”

The Ducks’ goals, including two in the third period, were scored by Wyatt Wong, Tyler Shetland, Vail Ardizzone and Dylan Reightley.

With a potent offensive attack like the one the Rangers possess, Gragnano knows it can take them a long way in the tournament.

“There’s a lot of talented players and as much as you wanna give them details to focus on, I kind of just have to wind them up and let them loose.” 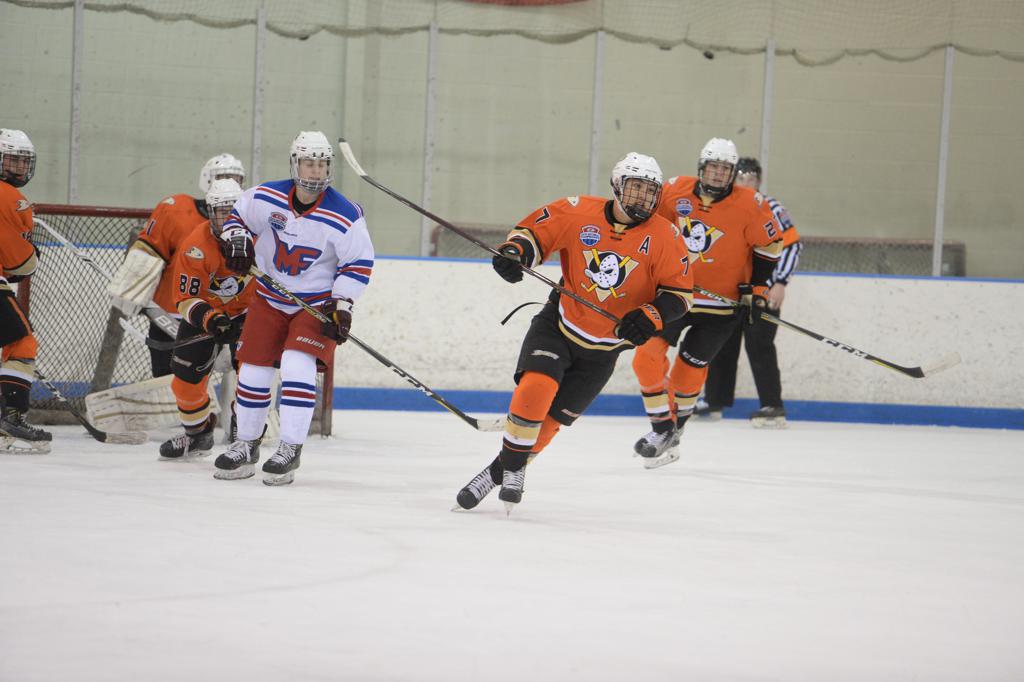 Anaheim Jr. Ducks forward Jake Sujishi looks after a puck during Thursday's contest versus Mid Fairfield at the USA Hockey Tier I 18 U tournament. (Photo by Carmo Photography)

A power play goal in the second period scored by Avalanche defenseman C.J. McGee was the difference maker in their win against the Stampede. Cole Edgerton, Scott Osani and Oliver MacDonald all tallied a goal in the first period for NJ, as part of a five-goal opening 20 minutes. Sioux Falls forwards John Jaworski and Marco Escobar found the back of the net in the first stanza, and Maurice Newnam added a goal of his own in the third period.

Two goals scored 1:12 apart in the third period by Jacob Schleinz and Michael Carso gave the Mission a comeback win in tightly-contested game over the Bulldogs. Robby Drazner and William Spitzer were responsible for the other two scores for Chicago. Yale received two goals from Peter Diliberatore and another from Kevin Wall, with one coming in each period.

Two goals from Nicholas Stapleton paced the Culver offense in their opening game victory over Tampa. Zachary Richterman, Patrick Schmiedlin and Jackson Pierson each found the back of the net for Culver, while Connor Reed and Tyler Lyewski scored for the Scorpions. Brock Paul added three assists for the winning side.

Tristan Amonte and Jay O'Brien set the tone for the Whalers in their victory over the Islanders with two goals a piece, and Aidan McDonough and Evan Googins finished off the scoring for Cape Cod. PAL received goals from three different players (Matthew Minerva, Jack Oleary and Christopher Mott) in defeat.

Miles Read, Joseph Demers and William Strop each scored in the shootout for Dallas and goaltender Dawson ZImlich was the hero between the pipes for the Stars. Demers added a goal in regulation, and Anthony Bilka scored the other for Dallas. Michael Gebhardt and Jake Roberts scored for CCYHA.