CHARLOTTE, N.C. -- In fitting fashion, it was the team donning ‘Tar Heel Blue’ earning the first victory at the Tier I 14U National Championships here in the Tar Heel State.

Action got underway at the Extreme Ice Center in Charlotte, North Carolina, with Little Caesars exploding to a 7-1 win over the Dallas Stars Elite to kick off pool play in the Liberty group.

Griffin Jurecki opened the scoring for Little Caesars on the power play 5:22 into play before Mikita Tarasevich made it a two-goal game 1:33 later.

“We had a great start with two early goals, said Patrik Stefan, head coach of Little Caesars. “After that, I think we took over the game a bit and overall it was a good start to our journey here in Charlotte.”

Goaltender Zakari Brice kept Dallas off the board with a sprawling breakaway save midway through the first period, his first of five point-blank stops throughout the contest as part of an 18-save performance.

“Getting an early lead and making some big saves early on really helped me get comfortable,” said Brice. “We’re a really close group and we’re all excited to be here to compete for a national championship.”

O’Brien tallied again for Little Caesars in the final frame before Brenden Coon scored for Dallas with 9:46 remaining to account for the 7-1 final.

Both teams will continue pool play in the Liberty group tomorrow, with Little Caesars taking on the Perinton Youth Hockey and Dallas meeting the New Jersey Colonials.

“It’s been great here so far,” said Stefan. “This is the best of the best competing for a championship and we’re ready to get back on the ice tomorrow.” 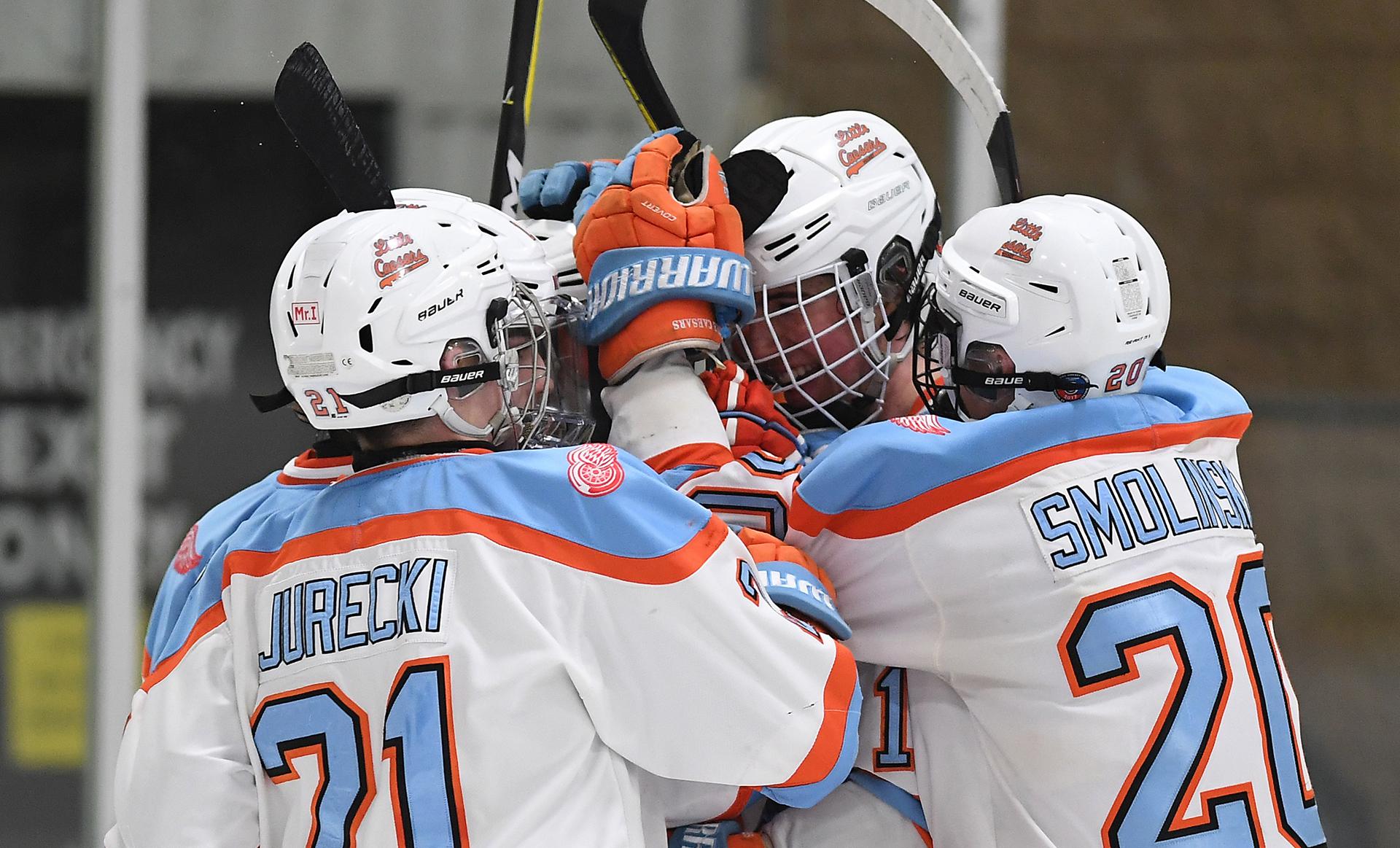 Perinton Youth Hockey 2, New Jersey Colonials 1 (SO) - Perinton Youth Hockey, out of Rochester, New York, earned a 2-1 victory over the New Jersey Colonials to open pool play in the Liberty group. Gregory Spitznagel opened the scoring for the Colonials with 6:37 left in the second period. Anthony Agostinelli tied the game for Perinton with 3:33 to play. Matthew Gagnon scored the game-winner in the fifth round of the shootout to secure the victory for Perinton. Nicholas Anderson finished with 26 saves, and stopped four of five shots in the shootout, to earn the win in goal for Perinton. Thomas Heaney made 19 saves in net for New Jersey.

Compuware 9, Sioux Falls Jr. Stampede 0 - Compuware used six third-period goals to pull away for an opening 9-0 victory over the Sioux Falls Jr. Stampede. Dylan Duke opened the scoring in the first period before Redmond Savage and Sasha Pastujov made it a 3-0 contest through two periods. Ty Gallagher, Noah Lamba, Adam Pietila, Sam Volturo, Duke and Sterling Cooke added tallies in the final frame. Goaltender Will Fox made 14 stops to earn the shutout for Compuware. Duke (2-2) and Pastujov (1-3) each finished with a team-high four points.

Boston Jr. Eagles 4, Chicago Mission 3 - The Boston Jr. Eagles capitalized on a five-on-three power play late in the second period with a pair of goals en route to a 4-3 victory. Landyn Greatorex opened the scoring for Boston with five minutes left in the opening period. After Jack Silich tied the game 1:21 into the second period, Boston got power-play goals from Davis Kinne and Nick Roukounakis late in the frame after a pair of penalties on Chicago. The Mission cut the deficit to 4-3 in the final period with goals from Davis Burnside and Silich, but was unable to net the equalizer. Nicholas Bevilacqua made 29 saves in goal to earn the win for Boston.

"This was a critical victory," said Kent Hughes, head coach of the Boston Jr. Eagles. "We were fortunate to survive that late push from Chicago. There's a lot of excitement in the room right now. We're glad to get that first game, and win, under our belt."

The LA Jr. Kings celebrate the 7-1 victory over Florida

LA JR. Kings 7, Florida Alliance 1 - The LA Jr. Kings scored six straight goals to break an early 1-1 tie and earn a 7-1 victory over the Florida Alliance. Brandon Plaga netted the games first goal for LA 1:45 into play before Bryceon Lago responded just over seven minutes later for Florida. Andrea Gasseau broke the deadlock with 1:32 left in the opening frame, and Parker Murray and Riley Ruh scored second-period markers to make it 3-1 after two stanzas. Arvega Hovsepyan, Blake Simons and Gasseau each tallied in the final frame to account for the 7-1 final. Alexander Bonrouhi made 14 saves to earn the victory in goal for the Kings.

Buffalo Jr. Sabres 4, Shattuck-St. Mary's 1 - The Sabres scored three goals in the final period to break a 1-1 tie and earn a 4-1 victory to open play over Shattuck-St. Mary's. Defender Matthew DeSpirt broke a scoreless tie 3:19 into the second period before Connor Mahony tied the game on the power play for Shattuck with 1:50 left in the frame. Buffalo got goals from Ty Broad, Jak Vaarwerk and Patrick Cole in the third to seal the victory. Trent Kubiak made 23 saves to earn the win in goal for Buffalo.

"We knew this was an important game for us," said Bill Loupee, head coach of the Buffalo Jr. Sabres. "We played Shattuck during the year and we knew they were a talented team. We were able to capitalize in the third period and its exciting to walk away with a victory."

Pittsburgh Penguins Elite 3, Victory Honda 0 - Shawn O'Donnell, Colby Saganiuk and Evan Vanden Heuvel each netted goals for Pittsburgh as the Penguins opened the tournament with a 3-0 win over Victory Honda. Justin Cataldo made 21 stops, including nine in the final period, to earn the shutout win for Pittsburgh.

VIDEO: Colby Saganiuk extends Pittsburgh's lead to 2-0 on the power play with 6:42 remaining

Mid-Fairfield Jr. Rangers 5, Boston Jr. Terriers 4 (OT) - Paul Davey netted the overtime winner with 2:20 left in the extra frame to lead the Rangers to a 5-4 victory over Boston. The Rangers also got goals from Jamison Moore (2), Ryan Ufko, and Ryan St. Louis while Andrew Haxton, Christian Monturio, Patrick Morrissey and Michael Cataldo tallied for the Terriers. Conor Callaghan finished with 19 saves, including a point-blank stop with three seconds left in regulation, to earn the victory in goal for Mid-Fairfield.

VIDEO: Paul Davey nets the overtime winner for the Rangers