CHARLOTTE, N.C. -- On the last day of the work week, business was booming for the Pittsburgh Penguins Elite.

Pittsburgh flexed its Steel City muscle in a 4-1 victory over the Boston Jr. Terriers this morning in Charlotte, North Carolina.

“I thought our pace today was better than yesterday,” said Brian Mueller, head coach of the Pittsburgh Penguins Elite. “We’re a grind-it-out type team. High compete level and work ethic is what we’re built on and we played with great energy today.”

Patrick Silhanek took advantage of a Terriers’ turnover and converted in the slot to give the Pens a 1-0 lead 3:11 into play. Just 1:35 later, Evan Vanden Heuvel buried a rebound for his second goal in as many days to make it a two-goal contest.

Ty Voit then scored from the left circle on the power play 4:11 into the middle frame to make it a 3-0 score.

“I popped up back door for Colby (Saganiuk) and he made a nice pass to me that I was able to bury,” said Voit. “I think everybody on each line and pairing has a special bond. We have faith in each other to come up in big moments and put the puck in the net.”

The Terriers responded just over a minute later with a power-play goal by Vincent Gould, but Pittsburgh controlled the play the rest of the way, providing little opportunity for the Terriers to make it a one-goal game.

“We succeeded in not giving up much offensively today,” said Mueller. “We finished our checks and capitalized on our opportunities at the other end.”

The Pens sealed the victory with an empty-net goal by Shawn O’Donnell with four seconds to play.

Michael Brown made 11 stops to earn the victory in goal for Pittsburgh, while Layne Browning made 28 saves for Boston.

With the victory, the Pens clinch a berth in Sunday’s quarterfinals  and sets up a showdown against the also undefeated Mid-Fairfield Jr. Rangers for the top-seed in the NHL group tomorrow afternoon.

“We played the Rangers a handful of times this year,” said Mueller. “They’ve all been really close games. We just have to continue with our game plan and can’t get away from what’s made us successful so far.” 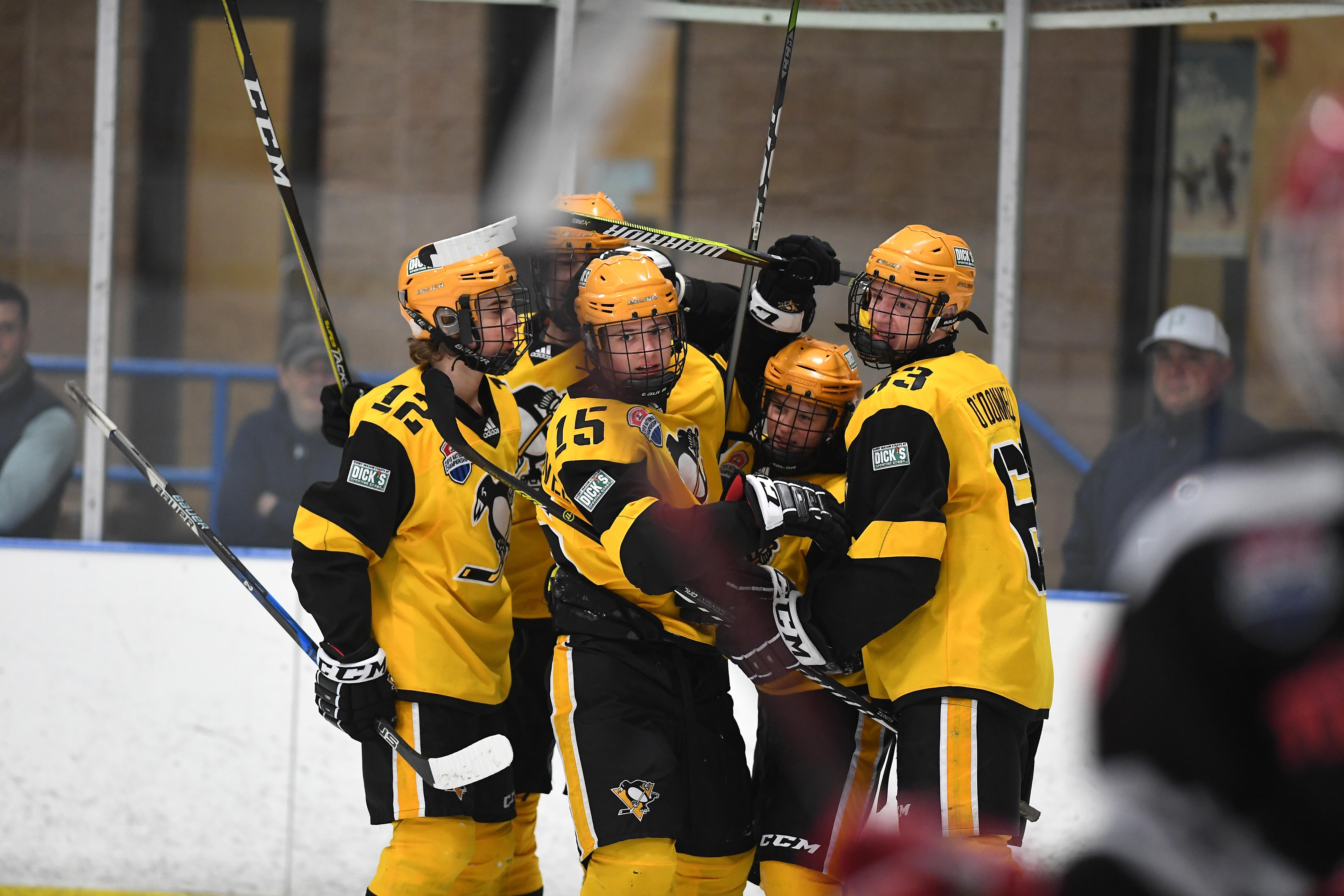 Pittsburgh goes for the top seed in the NHL group tomorrow

Mid-Fairfield Jr. Rangers 4, Victory Honda 1 - Patrick Neal netted a pair of goals to lead the Rangers to a 4-1 win over Victory Honda. Ryan St. Louis and Jamison Moore also scored for Mid-Fairfield. Connor Miller netted the lone goal for Victory Honda. Conor Callaghan stopped 32 of 33 shots to earn the win in goal for the Rangers, who clinched a spot in Sunday's quarterfinals. Mid-Fairfield takes on Pittsburgh tomorrow afternoon with the top seed from the NHL group on the line.

Dallas Stars Elite 3, New Jersey Colonials 2 (OT) - Liam Fricker tied the game with 10.7 seconds left before Bryce Howard netted the overtime winner :54 into the extra frame to give the Dallas Stars Elite a come-from-behind 3-2 victory. Brent Johnson also scored for the Stars, while Cam Bergeman and Sam Lipkin tallied for New Jersey. Goaltender Christopher Hintz made 45 saves, including 22 in the first period, to backstop the Dallas effort.

Compuware 5, Chicago Mission 1 - Compuware netted four goals in the final period to pull away from the Chicago Mission for the 5-1 victory. Andrew Jeffers opened the scoring for Compuware with 4:19 remaining in the opening frame. Dylan Duke made it a 2-0 game 2:37 into the third stanza before Davis Burnside pulled Chicago within a goal 1:34 later. Compuware scored the final three goals of the contest from Sasha Pastujov, Bennett Barnes and Mekai Sanders. Goaltender Will Fox picked up the victory in net with 16 saves.

Boston Jr. Eagles 4, Sioux Falls Jr. Stampede 3 (SO) - The Boston Jr. Eagles overcame a 2-0 first-period deficit to win in a shootout, 4-3, over Sioux Falls. Jacob Vockler and Andrew King gave the Stampede the early two-goal lead before Thomas Goguen and Timmy Delay tied the game with second-period markers. Calvin Moioffer restored the lead for Sioux Falls with 3:43 left in the second period, but Culin Wilson tied the game just 53 seconds later. Wilson netted the shootout winner for Boston after Delay and Jack Hughes converted in the first two rounds of the shootout.

Shattuck-St. Mary's 4, LA Jr. Kings 0 - Peter Reynolds netted a pair of goals to lead Shattuck-St.Mary's to a 4-0 victory over the LA Jr. Kings. Marino Ramirez stopped all 32 shots he faced for Shattuck, who also received goals from Shai Buium and Conner Mahony.

Buffalo Jr. Sabres 3, Florida Alliance 2 (OT) - The Buffalo Jr. Sabres tied the game on a goal by Michael Bevilacqua with 1:24 remaining before Riley Kubiak netted the game-winner 32 seconds into overtime to defeat the Florida Alliance, 3-2. Anthony Kahl scored twice for the Alliance, including the go-ahead goal with 2:48 left, before Bevilacqua tied the game. Luke Morris also scored for Buffalo. Konrad Walberger stopped 29 shots for the Sabres, while Jacob Fowler made 30 saves for Florida.