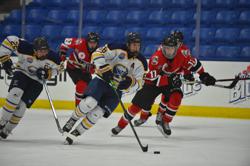 The bad news is that the Buffalo Sabres will miss the playoffs for the seventh straight time, and will finish with the league’s worst record. The good news is that hope springs eternal from the grassroots level thanks to a continued emphasis in development.

Youth hockey teams skating under the Sabres’ blue-and-gold banner continue to fare well at the local, state and national level, with teams at the 14 & Under, 15 and 16 & Under age groups earning spots at USA Hockey National Tournaments. And a fourth team, at the 12 & Under level, recently won the New York State tournament.

One of those teams lived up to its billing as the No. 1 seed as it opened the 15 Only tournament with a 7-3 victory over the Cleveland Barons.

It was a rematch between familiar foes who met earlier this season during an early-January home stand at the HarborCenter where the Sabres didn’t surrender a goal in three games.

“Even though we handled them pretty good when we played them earlier in the season, we didn’t want to take them lightly,” said Sabres head coach Jacob Brozyna. “We knew they have played well as of late, and beat some good teams to get here. They were definitely a different team from the last time we played them.”

While the Barons have improved as the season has gone on, the Sabres have been a model of consistency, losing only a handful of games all season. And as they have shown all year, the boys from Buffalo spread the offense around today as seven different players scoring goals to support an 11-save effort from goaltender Andrew Doran.

“We are playing very fast right now and I’m hoping we’re at our peak this week,” Brozyna said. “Besides a couple of breakdowns today I think we played pretty well today. And if we take care of a few things, I think we’ll be pretty strong throughout the tournament.”

The teams took advantage of defensive lapses as they traded first-period goals. First, Logan Cleary was left alone in front of the Sabres net where he tapped in a rebound from a shot by Nolan Meekhof. The Sabres quickly responded as Austin Robinson slipped a check and deposited a Sam Saccone shot past Barons goaltender Colin Purcell.

“We knew their goalie moves really well and we knew we had to get a lot of shots on him and take his vision away,” Brozyna said.

The Sabres stepped up the pressure in the second period with three goals from Noah Daniels, Blake Humphrey and Declan McDonnell. But the back-breaker came with one second left on the clock as Dalton Wright beat the clock to extend the Sabres’ lead.

Under the support of Kim and Terry Pegula, who own the NHL club in addition to the state-of-the-art HarborCenter, youth hockey has continued to take off in Buffalo. Already well known as the home of such NHL stars as Patrick Kane and Nick Foligno, the area has become a hotbed for hockey development thanks in large part to the number of former Sabres who continue to call Buffalo home and give back to the next generation of western New Yorkers.

“The HarborCenter is a great facility and they offer a ton of great programs,” Brozyna said. “We also have a lot of former pros help us with a lot of skill development. It’s a one-stop shop and we’re lucky to have it.”

And that support is beginning to bear fruit throughout the New York District and beyond.

The Sabres wrap up the preliminary round with games against unfamiliar foes in the Mercer Chiefs on Friday and Team Wisconsin on Saturday. While there’s a great deal of uncertainty, Brozyna believes that his team controls its own destiny.

Josh Doan’s second goal with 3:37 left proved to be the difference in a back-and-forth affair that saw the 13th-seeded Phoenix Jr. Coyotes upset the fourth-seed from Connecticut. CCYHA jumped out to an early lead seven seconds into the game on an unassisted goal from Nick DeSantis before Jake Norling notched the equalizer off an assist from Matthew Knies, who had four helpers in the game. Jack Williams added a pair of goals in a losing effort.

John Bonner’s short-handed goal midway through the first period provided Noah Rupprecht with all the offensive support he would need as the Minnesota Blue Ox opened the tournament with an impressive effort. Rupprecht stopped 17 shots in what turned out to be a tight-checking affair. Charlie Erickson and Anthony Menghini also scored for the Blue Ox.

Kienan Draper and David Dixon each scored a pair of goals to power Little Caesars past Team Maryland, 7-3. Garrett Szydlowski and Dixon scored goals 12 seconds apart late in the second period as the Michigan District champions broke open a tight game and then turned things over to goaltender Hunter Garvey, who turned aside 15 of 18 shots. William Haigley, Ethan Davidson and Joseph Takacs scored for Maryland.

Mark Monoco and Eamon Powell each scored a pair of goals, and Grant Riley turned aside 25 of the 26 shots he faced as the Rochester Coalition thumped the Alaska Oilers, 5-1. Conner Ehmann scored a first-period goal for the Oilers.

Garrett Steele scored a pair of goals to pace an offensive explosion as the Oakland Jr. Grizzlies shutout Team North Dakota, 9-0. In total, eight different Grizzlies found the back of the net, and Cullen DeYoung stopped all 23 shots he faced. Six third-period goals broke open what had been a close game.

James Barbour scored a pair of goals, and Matthew O’Donnell earned a shutout as the Chicago Mission opened the tournament in impressive fashion. Nicholas Donato and Sean Matthews also scored for the Mission.