Game Of The Day: Blues Beat The Clock, Coyotes

PLYMOUTH, Mich. – Games at the USA Hockey 15 Only National Championship tournament are 51-minute affairs, and the Phoenix Jr. Coyotes and St. Louis Blues scratched and clawed through every second of that allotted time to determine the outcome.

One more minute on the game clock may have brought a different outcome as the Arizona desert dogs battled to the final buzzer but came up on the short end of a 3-2 decision against a resilient Blues team.

The Blues’ victory left both teams with identical 1-1 records heading into their final preliminary round games. The scenario on Saturday is simple, win and move onto the quarterfinals. The Blues will face the CCYHA Selects, while the Coyotes draw the Minnesota Blue Ox.

“This is the exact reason why these kids play at this level,” said Blues head coach Jordan Janes. “It’s not an easy task moving on in a tournament like this. Having been through it a bunch of times as a coach, I just know that you have to take it one day at a time, no matter who you play because they’re going to be a good team and you have to be ready to go.”

With the tournament coming down to the wire, the Blues can bank on the chemistry they’ve developed over the course of a long season.

“The chemistry certainly does help because you learn to play together as a group,” Janes said. “For us a lot of these kids have been together for three years. It’s a special experience having been together for as long as we have.”

One of the core group of kids is goaltender Mitchell Day, who came up big against the relentless Phoenix pressure, stopping a number of Grade A chances, including a breakaway from Coyotes forward Josh Doan in the first period.

The Blues jumped on top with a pair of goals scored 21 seconds apart in the first period. First, Clayton Liefeld took a feed from Jared Bratton, who made a nifty play picking the pocket of a Coyotes defender and slipped a shot past Jake Hall. Off the ensuing faceoff, Matthew McGowan cruised down the right wing side of the ice and tucked it inside the near post.

Bratton padded the lead in the second period when he slipped a check at center ice and ripped a low drive that beat Hall low to the stick side.

Whatever Coyotes head coach Shane Doan said during the intermission it seemed to work as his team came out flying in the final frame with Josh Doan scoring a power-play goal 27 seconds into the final frame. Then, with time winding down, Jake Alcaraz cut the lead to a single goal as he tipped home Matthew Knies low drive for a power play goal.

With Zachary Daniels off for cross-checking, the Coyotes pulled the goalie for an extra attacker, but Day stood tall to secure the win.

“It was a tough third period being up 3-0 and then holding on,” Janes said. “I was really proud of how the kids came together at the end and stayed composed and managed to finish this one off.” 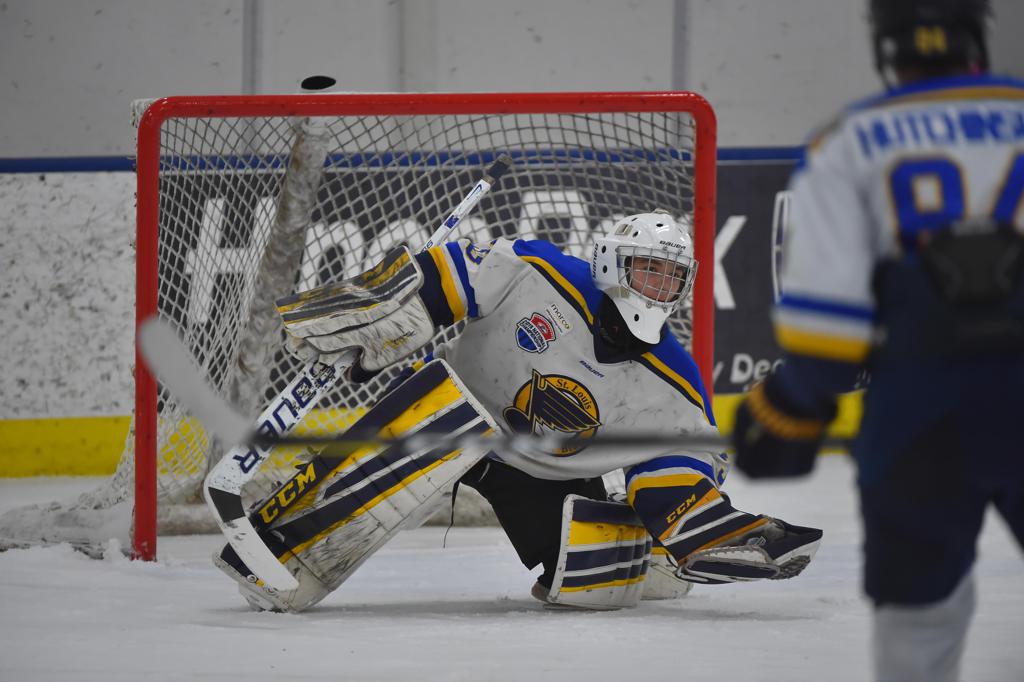 After mustering only four shots on goal in an opening game shutout against the Chicago Mission, the Boston Advantage found its legs against a tough Oakland Jr. Grizzlies team before falling in a shootout, 2-1. After swapping third-period goals, the teams headed to a shootout, where Ryan Beck and Tanner Dickinson scored for the Grizzlies, and David Filak stopped all five Advantage shooters. Connor Bradford was outstanding for the Advantage, stopping 22 Grizzlies shots, including a number from close range. Only a Dominic James deflection off a Matthew Shaw point shot slipped past Bradford. Ryan Corcoran was on the finishing end of a brilliant give-and-go passing play with Van Bouthillier. “Yesterday we didn’t play like we’re capable of, but today I thought we played like we normally play,” said Tim Lovell, head coach of the Advantage, which is a split-season team. “They outplayed us in the first and we outplayed them in the second and it was back and forth in the third. We both had our chances in the overtime.”

Matthew Romer and Nicholas Urtis scored 2 minutes and 15 seconds apart to snap a 1-1 tie in the second period as the Chicago Mission cruised to its second victory of the tournament with a 6-1 decision over Team North Dakota. Maxwell Itagaki opened the scoring for the Mission with his first of two goals on the day before Benjamin Stinden tied it late in the first period. Kristijan Savovic scored 39 seconds into the final frame, and Urtis and Itagaki added their second goals to put the game away. Marcello Scalise stopped 15 shots to pick up the win. The Mission will look to improve to 3-0 against the Oakland Jr. Grizzlies while North Dakota will shoot for its first win against the Boston Advantage.

A day after dropping its opener against the Phoenix Jr. Coyotes, the CCYHA Selects rebounded with an impressive performance against a tough and talented Minnesota Blue Ox squad as both teams evened their tournament records after a 4-2 decision. The team made up of Connecticut prep school players scored three times in the first period to jump out to an early lead on goals from Nick DeSantis, Justin Gordon and Victor Czerneckianair. The Blue Ox stormed back with a pair of goals from Christian Galatz, but CCYHA goalie Bennett Jung closed the door down the stretch before Jack Williams added an empty net goal.

Blake Humphrey’s goal at the 11:57 mark of the third period snapped a 3-3 tie to lift the top-seeded Sabres past the Mercer Chiefs. Austin Robinson, Declan McDonnell and Dalton Wright scored second-period goals to erase an early deficit after Lachlan Getz staked Mercer to an early lead. Sean Grant paced the Chiefs attack with two goals and assist, and Jake Puskar added a pair of helpers for the Chiefs, who dropped to 0-2 in the tournament.

Mack Keryluk and Brady Welsch scored second-period goals to snap a scoreless tie as Team Wisconsin cruised past the Cleveland Barons. Ethan Mork stopped all eight shots he faced to help Wisconsin even its tournament mark at 1-1.

Five different skaters found the back of the net, and Talon Wild stood tall between the pipes as Little Caesars punched its ticket to the quarterfinals. Kienan Draper led the offensive attack with a goal and two assists, and Jacob Truscott added a goal and an assist. Mark Estapa, Gabriel Bennett and Jack Kircher also scored for Little Caesars. Benjamin Casey scored an unassisted goal in the second period for Alaska, which dropped to 0-2.

The Rochester Coalition steamrolled into a quarterfinal berth with another dominating performance. Nicholas Rexine scored a pair of first-period goals to pace the Rochester offensive attack that pounded Maryland goalies Christopher Jackson and Elon Granston with 31 shots.  On the other end, Samuel LiVecchi made 27 saves to notch the shutout. Eamon Powell added a goal and two assists for the Coalition.