Like many Minnesotans, Jill Pohtilla played hockey on a neighborhood pond in the 1970s. She skated with her older brothers, who always included her in their shinny, so the idea that hockey was exclusively a boys’ game never crossed her mind.

When Wayzata School District 284 iced a girls team in 1974-75, Pohtilla simply carried on the family tradition.

“We were always skating,” she said. “My dad saw this ad in the newspaper inviting girls to play, and I thought, ‘Sure. My brothers got to play, so I will, too.’ There was a whole group of us girls who showed up in 1974, mostly in figure skates.”

One of them was Laura Halldorson. She skated during elementary school gym classes, in her mom’s figure skates. One day in 1973, the classroom loudspeaker crackled with news that District 284 would form a hockey team.

“They didn’t say ‘boys,’ because that was all there was,” said Halldorson. “One of my classmates, because he knew I liked skating, he kind of gives me the elbow and says, ‘You should sign up. We have a girl on our team.’ But I was too nervous, even though I really liked hockey.”

One year later, the loudspeaker offered an invitation to join a girls team.

“So that one, I was like, ‘Oh, maybe I could do this,’” recalled Halldorson. “My mom took me and my younger sister to the high school to sign up, and even in the parking lot, I almost chickened out. But my mom told me to just try it.

“I’m really glad I did, because it shaped a lot of what I ended up doing later, and it was a big part of my life in those formative years.” 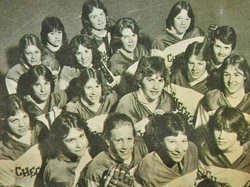 Bob May’s daughter, Jan, didn’t know him as the national-championship winning bench boss at the University of North Dakota in 1959. She knew him only as dad, and perhaps as the dentist he became in his second career. But when Jan reached her final years of elementary school, Bob brought his whistle out of retirement to lead the District 284 girls team.

He became a fierce advocate for girls hockey, battling for ice time and respect for his players. Years later, he wrote of a ripped puck bag after practice and a smug bystander suggesting that he had dropped the team’s hair curlers. May replied with thinly veiled threat about a hockey stick in the bystander’s mouth.

“I think this unknown man gave me more satisfaction than anything else that first year because I now knew I was fighting for my players,” wrote May.

Within three seasons, he helped turn a batch of beginners into a formidable bank-sponsored girls team known as the Checkers. Pohtilla, Halldorson and Jan May emerged as linemates, skating through their middle school years in a girls league. As ninth graders in 1978, they helped the Checkers win a girls state championship. The victory qualified them to look beyond Minnesota’s borders for the first time and May turned his attention to USA Hockey’s national girls tournament.

After two years as a trial balloon, the girls tournament earned official USA Hockey national-championship status for 1978, prompting tournament director Carl Gray to proclaim, “Girls hockey is for real. And it’s getting better every year.”

May knew competition would be stiff at USA Hockey’s inaugural Girls Nationals, so he bolstered the Checkers’ roster with a few players from elsewhere in the Twin Cities. The fortified Wayzata club, which also included an assistant coach – Jack Thompson – and Pohtilla’s dad, Jim, as team trainer, traveled to Orchard Park, New York, and received a warm welcome at Nationals.

“As a kid, you don’t get it, but looking back now, I realize that one of the best parts was that we were treated like hockey players,” said Pohtilla. “The people running it, USA Hockey, or AHAUS as it was known then, didn’t bat an eye at the fact that we were girls. Everyone treated us with the utmost respect. Nobody treated us like we were wasting ice time. The people running it just felt that girls deserved this opportunity, too.”

Pohtilla and her teammates made the most of the opportunity, easily notching a pair of early victories. They were blissfully unaware of the storm clouds engulfing them.

May, the architect, was called to a meeting with tournament officials. The Checkers’ opponents had lodged an official protest, questioning his pre-Nationals roster additions. Were they from the same suburb as the other girls? The answer was no. Tournament officials had no choice but to declare those non-Wayzata girls ineligible.

“When we won our ticket to the national tournament, Coach May said some of these teams out east are really good, so let’s get a group that’s really good, and he plucked some of the best players from other teams to add to our core of players from Wayzata,” recalled Pohtilla. “I think he was just trying to be competitive and get us on the map and build interest and awareness of girls hockey. The intent was good, but he just didn’t realize that you couldn’t add players like that.

“When it came down to it and the protest was filed, the tournament staff didn’t want to penalize kids for an adult mistake, so they let our wins stand, but they said that we’d have to play the rest of our games with only the Wayzata girls who played together all season. That left us with only eight skaters and a goalie.”

May took an agonizing walk to the Checkers’ locker room and explained the situation to his players. They’d have to play the final day on fumes, beginning with the morning semifinal, and if they survived, the afternoon championship game, too.

“I won’t forget the feeling in the locker room,” said Pohtilla. “I remember just being confused about it, and then sad. Snippets of it won’t go away from my memory. We won the semifinal, but going into that championship game, we were absolutely exhausted. I remember the feeling. It felt important.”

“You know, we were fortunate enough to make it to Nationals, and it was the biggest deal of our year, for sure,” said Halldorson. “We were all competitive and we all wanted to win, but I think more than anything, we just thought it would be so much fun to take that trip and experience something like that. And it was.”

After an offseason playing different sports, the Checkers returned to the ice for the 1978-79 season as a team on a mission. USA Hockey’s Girls Nationals or bust, this time in Concord, Massachusetts. They played a full season together as a singular squad and added games against boys teams to hone their competitive edge. In April, they flew to Boston looking for redemption.

In the Nationals opener, they topped Hudson, Massachusetts, 2-0. Then they topped Shawsheen, Massachusetts, 4-2. In the Checkers’ third game, they tied 1-1 with the Detroit Mini Wings. That set up a quirky tie-breaker that seemed lethal to the Checkers’ championship dreams. They needed to beat Sloan, New York, by at least 11 goals or they wouldn’t advance to the title game.

“Our coaches came in and told us the math and I remember my heart sinking,” said Pohtilla. “But they told us that we’ve just got to score ‘em one at a time.”

The Checkers scored six in the first period without allowing a goal. They scored twice in the second to take an 8-0 lead. Still, they needed more to advance.

“We had to score a lot of goals, and we felt bad about it, but we had to do it because of the crazy goal-differential situation,” recalled Halldorson.

Eight more goals in the third period were more than enough. The Checkers won 16-0, and despite long odds, they were headed back to the championship game, this time in the Girls Open B Division.

The Checkers met Cape Cod, Massachusetts, in the finale. The score was tied 2-2 with less than two minutes to play in the third period when Halldorson corralled a pass from May and scored the championship-winning goal.

“Coming in to the final, we just felt like, “Alright, we’re going to show everybody. This is who we are; this is what we’re about,” said Pohtilla. “When Laura scored, it felt like I was floating on air because we worked so hard to get there – and to get back there.”

After the tournament, Halldorson told the Minneapolis Tribune, “I went nuts. I just about died. I started running across the ice up on my toes.”

Today, she downplays the style points, but not the emotion.

“It was a backhand and I was surprised it went in and I remember hugging my teammates, then getting clotheslined and everyone falling on top of me,” she said. “But we were young and emotional, so it was definitely exciting, especially with the season before and how it ended at Nationals and the controversy. To come back the next year and win it was rewarding. It was just so much fun. I look back at those memories and they were some of my favorite times.”

As USA Hockey celebrates the 40th anniversary of Girls Nationals in 2018, both Halldorson and Pohtilla are delighted about the evolution of the event and the girls game as a whole, an ascension they witnessed first-hand as trailblazing women’s hockey head coaches at the University of Minnesota and Augsburg College, respectively.

Halldorson led the Golden Gophers to three national championships (the American Women’s College Hockey Alliance national title in 2000 plus a pair of NCAA Division I national championships in 2004 and 2005). Pohtilla was named the first head coach of the Augsburg women's hockey team, leading the Midwest’s first collegiate varsity women's hockey program to a pair of MIAC championships. The former Checkers linemates went head-to-head in the Gophers’ inaugural varsity game. When Pohtilla’s father passed away last year, the linemates reunited, Pohtilla the center, Halldorson the right wing and May on the left side, to pay their respects, fittingly, as a trio that starred together at Nationals.

“It seemed like a lifetime ago when we played, and to compare the number of teams and caliber of players and the awareness of it, the difference is night and day, both with Nationals and girls hockey nationwide,” said Halldorson. “AHAUS and USA Hockey was how it started and the organization has played a very big role in the growth of girls and women’s hockey. I go back to a pivotal season, 1997-98, and USA Hockey was instrumental in creating a women’s college hockey national championship – USA Hockey sponsored it – and that was also the first year of women’s hockey in the Olympics and the launch of the Patty Kazmaier Award, which was also a USA Hockey-sponsored award. That’s a really good example of the impact USA Hockey has had on our sport.”

“USA Hockey played and still plays a huge role in the growth of girls and women’s hockey,” she said. “Through the years, they easily could have said, ‘We’ll wait and see,’ and not funnel money into it, but they took the lead. USA Hockey sought us out and made a huge grant. I can remember conversations with Dave Ogrean and he was so genuine about how USA Hockey could help. They were a huge catalyst. USA Hockey is all about growing hockey.”