Youth Tier-I 14U Notebook: Playoff Positioning On the Line

CHARLOTTE, N.C. -- It wasn’t just Moving Day at The Masters as pool play concluded at the Youth Tier I 14U National Championship just three hours north of Augusta.

The Buffalo Jr. Sabres (5 points) and LA Jr. Kings (3 points) entered Saturday looking to make a move into the Sunday’s quarterfinal round. There were scenarios aplenty for the Olympic group, with Shattuck-St.Mary’s (3 points) taking on the Florida Alliance (1 point) at the rink adjacent to this east-meets-west matchup and all four teams mathematically still alive.

With their quarterfinal hopes on the line, the Kings overcame a 3-1 deficit in the final period to top Buffalo in overtime, 4-3. However, with Shattuck earning three points with a 7-2 victory over Florida, Buffalo (6 points) and Shattuck (6 points) earned the top-two seeds from the Olympic group with the Kings (5 points) left on the outside looking in.

Despite just missing a quarterfinal bid, Kings head coach Jeff Turcotte couldn’t be prouder of his team’s effort to tie the game in regulation and win in overtime.

“We had such a great year and competed hard today,” said Turcotte. “Obviously it’s frustrating to not move on by one point, but you always want to win your last game of the season and we did that. Making it to Nationals was one of our goals at the beginning of the season and I’m very proud of this group for making it this far.”

Arvega Hovsepyan netted a power-play goal from the point to give LA a 1-0 lead with 4:54 left in the opening period. Buffalo responded in the middle frame on goals by Ty Broad and Patrick Cole to take a 2-1 advantage after two periods.

The Sabres made it 3-1 just 31 seconds into the third stanza on a tally by Brady Hildreth before the Kings charged back with a pair of goals by Blake Simons and Hovsepyan to tie the game.

LA continued to control the play and push hard for the go-ahead goal in regulation but was unable to get that pivotal third point as the game entered overtime. Aiden Hreschuk netted the game-winner for LA 1:28 into the extra frame.

After earning at least a point in all three games, Sabres head coach Bill Loupee is excited to compete among the final eight teams at the Youth Tier I 14U National Championship.

“I’ve never been more excited to lose a game in my life,” said Loupee. “Our goal from the beginning of the year was to be a top-10 team in the country. Now we’ve played ourselves into the final eight and we’re ready to keep this thing moving tomorrow.” 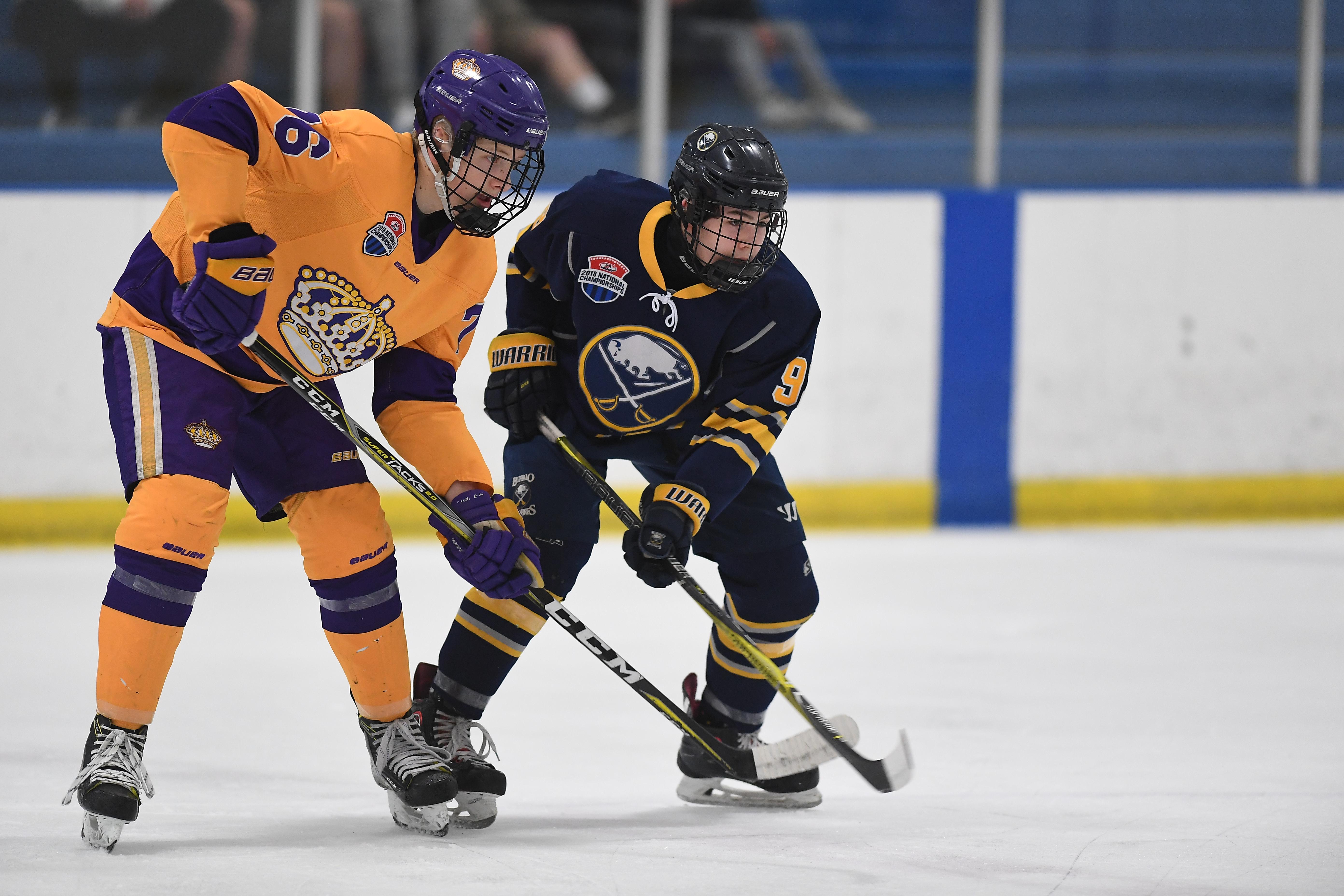 Compuware 3, Boston Jr. Eagles 1 - Sasha Pastujov, Andrew Jeffers and Sterling Cooke each scored to lead Compuware to a 3-1 victory and the top seed from the USA group. William Elias tallied for the Eagles. Will Fox stopped 17 shots to earn the victory in goal for Compuware. Despite the loss, Boston advances to the quarterfinals as the second seed from the USA group.

Chicago Mission 3, Sioux Falls Jr. Stampede 0 - Chicago broke a scoreless tie with three goals in the final period to close pool play with a 3-0 win over Sioux Falls. Tyler Haskins scored twice in the final stanza and Davis Burnside netted the other goal for Chicago. Nick Larrabee made 12 saves to earn the shutout. Quentin Sigurdson stopped 30 shots in net for Sioux Falls.

Shattuck-St. Mary's 7, Florida Alliance 2 - Shattuck-St. Mary's earned a quarterfinals berth as the two seed from the Olympic group with a 7-3 win over Florida. Peter Reynolds scored twice for Shattuck, who also got goals from Will Staring, Chris Alexander, Liam Gilmartin, Ethan Bagg and Braedon Ford. Jackson Graber and Luke Jankauskas tallied for the Alliance.

Pittsburgh Penguins Elite 4, Mid-Fairfield Jr. Rangers 3 (OT) - Colby Saganiuk netted the game-winner 2:31 into overtime to clinch the top seed from the NHL group for Pittsburgh. The Penguins jumped out to a 3-0 lead on tallies by Carter Schade, Saganiuk and John Fratto. The Rangers rallied with goals from Michael Salandra, Jamison Moore and Jake Bongo.  Justin Cataldo made 13 saves for Pittsburgh to earn the win in goal.

Perinton Youth Hockey 2, Dallas Stars Elite 1 - In what became a play-in game to tomorrow's quarterfinals, Jacob Kraft scored with 1:32 remaining to lift Perinton Youth Hockey to a 2-1 victory. With the win, Perinton advances as the second seed in the Liberty group. Anthony Agostinelli also scored for Perinton, while Brent Johnson tallied for Dallas. Nicholas Anderson made 15 saves to earn the victory in goal for Perinton.

Little Caesars 2, New Jersey Colonials 1 (SO) - After the teams traded goals in the final 8:17 of play, Luke Hughes netted the shootout winner as Little Caesars clinched the top seed in the Liberty group heading into the semifinals. Mikita Tarasevich scored in regulation for Little Caesars and Zach Sedlacek tallied for New Jersey. Zakari Brice made 18 saves for Little Caesars to earn the win. Nick Wallace finished with 25 stopped shots in goal for the Colonials.