Youth Tier-I 15-Only Notebook: Playoffs on the Line Today at USA Hockey Arena 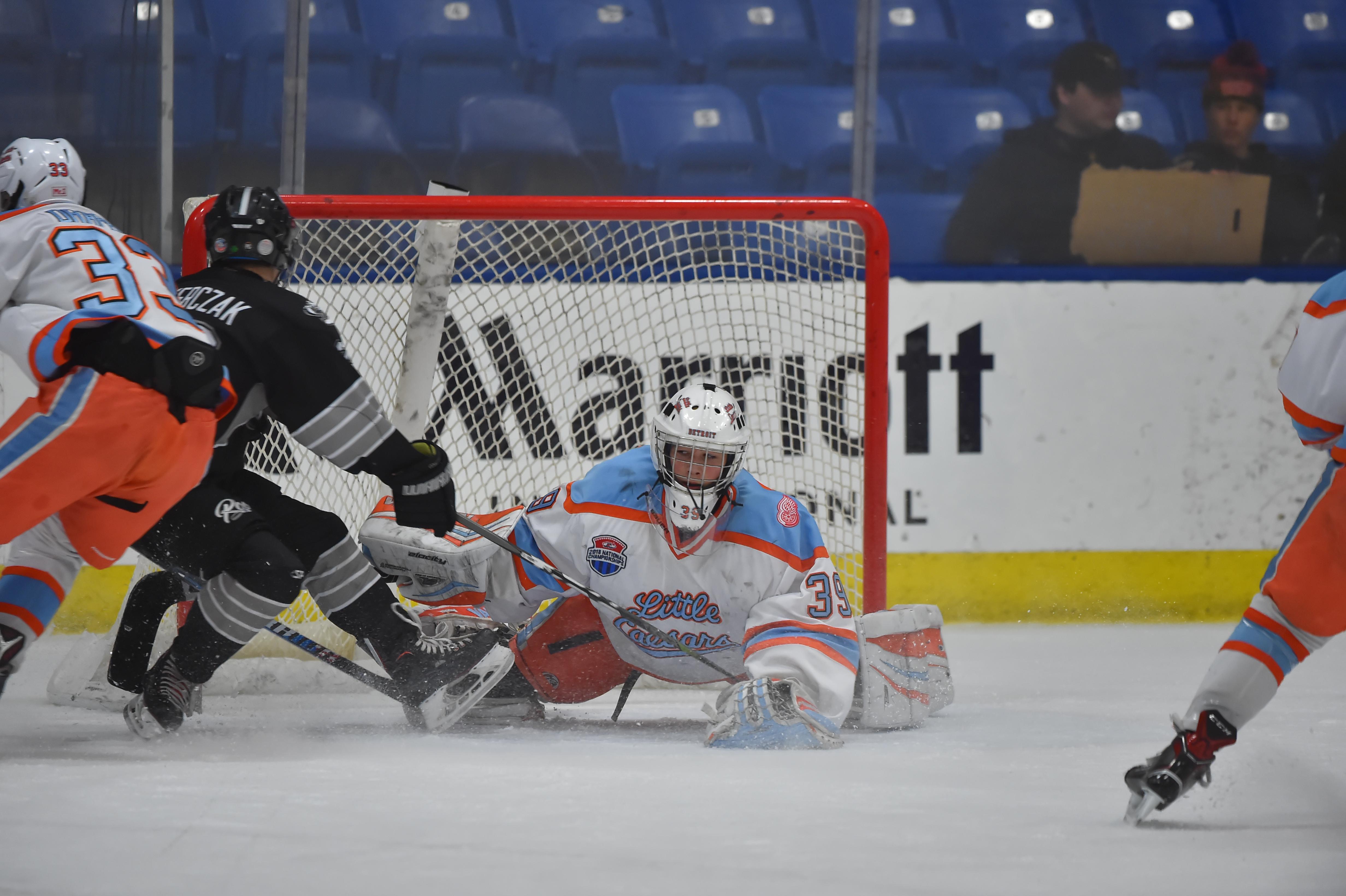 PLYMOUTH, Mich. – Kris Draper knows a thing or two about playing in big games. Over the course of a 17-year career with the Detroit Red Wings, he was a vital cog in the Wings drive to four Stanley Cups.

These days Draper is helping the next generation of players develop their own winning traditions as the head coach of Little Caesars. Like their coach, these 15-year-olds play with the same grit and determination that were trademarks of Draper’s career.

Despite a long layoff after winning the Michigan state tournament, the team continues to fire on all cylinders as it churned through the preliminary round at the 15 Only USA Hockey National Championship tournament.

Facing their toughest test to date against the Rochester (N.Y.) Coalition, the boys from Little Caesars closed out the preliminary round with a hard-fought 3-1 win to claim the division and set up a quarterfinal matchup with the Mercer Chiefs.

“These kids have played so much tournament hockey that they realize they have to continue to get better every day, and I think we’ve one that. But as I was telling the guys in the locker room, the tournament starts tomorrow,” Draper said.

“We obviously wanted to win our bracket, we wanted to go 3-0, and we did all that. Now it’s a one-game elimination tournament from here on out. You can see a lot of emotion in that dressing room and they’re excited for what comes next.”

The two teams met earlier in the season with Little Caesars coming out on top in a 6-4 contest. There’s been a lot of hockey played since that September game but Draper knew his team would have its hands full with a talented Rochester team that featured Grant Riley in net.

The Coalition have plenty of firepower up front, and they showed that when Griffin Tominez took a goal mouth feed from Nicholas Rexine and dangled around Little Caesars goalie Hunter Garvey for a first-period goal on the power play.

With Riley on his game early on, it looked like it could be a long day for Little Caesars. But in the second their relentless forecheck paid off when Jack Mesic stole the puck along the boards and flicked a backhand past Riley.

A little more than two minutes later, Little Caesars took the lead on the 5-on-3 power play as Carter Mazur’s wrist shot from the point beat Riley clean to the top shelf with Kienan Draper providing a screen in front of the net.

When you’re one of the top youth hockey programs in the country, there’s usually no shortage of talent up and down the lineup. And for Little Caesars that starts in the net where they have two talented puck stoppers. After Garvey was given the start in the tournament opener, Draper and long-time assistant coach Craig Roehl turned to Cooper Duncan against the Alaska Oilers. Today, the coaches decided to split the game down the middle, and once again both goalies were up to the task.

“It keeps both goalies focused and in the game,” Draper said. “Credit them that both of them responded with tremendous effort for us.”

Hanging on to the narrow lead, Tanner Kelly provided an all-important insurance goal on a beautiful deflection of a Jacob Truscott shot. It looked like Little Caesars would need all the insurance they could get as several penalties found them digging out of a lengthy 5-on-3 situation, but Duncan and crew kept the Coalition at bay.

“There’s a lot of desperation when you’re on a 5-on-3 and the guys did what they had to do, blocking shots, being strong and we got some big saves,” Draper said.

Nathan Mann and Declan McDonnell each notched hat tricks as the top-seeded Buffalo Jr. Sabres continued its run through the tournament with another impressive performance.

Despite surrendering three power-play goals they had more than enough offensive firepower to shoot down Team Wisconsin, 8-4.

The Sabres used a four-goal second period to break open a close game, and then relied on goaltender Luke Pavicich to shut the door on a Wisconsin comeback.

“The first half of this game was a battle for us and I liked the fact that we came through and battled through a lot of stuff today,” said Sabres head coach Jacob Brozyna.

“I didn’t the fact that we gave up four today, but I was obviously happy that we put nine up on the wall.”

Team Wisconsin was led by Tyler Herzberg’s three-point effort. Dalton Wright and Blake Humphrey also scored for Buffalo, who will face off against the Rochester Coalition in a Western New York showdown in the quarterfinals.

“The next game is the most important game,” Brozyna said. “That’s all we’ve been preaching all year and we’ll keep saying that as long as we’re here.

The Mercer Chiefs punched its ticket to the quarterfinals with an impressive 8-2 victory over the winless Cleveland Barons. Eight different players found the back of the net to provide more than enough offensive support for goaltender Thomas Semptimphelter, who stopped 12 shots.

The Alaska Oilers closed out their tournament run with an impressive performance thanks to the 12-save effort of goaltender Edward Makar. Five different Oilers found the back of the net, including four in a second-period flurry that broke open a scoreless contest. Bret Link, Cooper Morris and Jack Kerich scored power-play goals in the middle frame. Colin Hedland added a goal and an assist.

Anton Sorensen’s goal 36 seconds into the second period ignited a four-goal explosion as the Chicago Mission wrapped up the preliminary round with a 5-1 victory over the Oakland Jr. Grizzlies. Ryan Murphy, Michael Polley and James Barbour also scored in the middle frame as the Mission remained undefeated. Matthew O’Donnell stopped 29 of the 30 shots he faced. Nicholas Chmelevski scored for the Jr. Grizzlies, who still managed to keep their championship hopes alive.

Derek O’Donnell, Stephen Davis and Tony Archille scored in the shootout, and Connor Bradford stopped three of the four shots he faced as the Boston Advantage wrapped up the tournament with a thrilling victory over Team North Dakota. Advantage defenseman Stephen Davis scored a power-play goal with three minutes left to force the extra session. Benjamin Strinden and William Lawson-Brody, Jr. scored for North Dakota.

Bennett Jung stopped all three shooters he faced and Nick DeSantis scored the deciding shootout goal as CCYHA slipped past the St. Louis Blues with a quarterfinal date with the Chicago Mission on the line. Wil Rinaldi and Ari Rossi traded third-period goals in what was a hard-fought game dominated by outstanding goaltending from Jung and Mitchell Day. Charlie DesRoches and Rinaldi also notched shootout goals.

It was another example of how much the game has grown as a team from Arizona knocked off a team from Minnesota on the national stage. Logan Hawley scored 49 seconds into the game and the Phoenix Coyotes never took its foot off the gas as it cruised into the quarterfinals with a 3-2 victory over the Minnesota Blue Ox. Josh Doan’s power-play goal at the 6:08 mark of the third period snapped a 2-2 tie after Landon Parker and Anthony Menghini drew the Blue Ox even. Jake Hall came up big in the clutch for Phoenix with a 27-save effort, while Noah Rupprecht was equally solid for the Blue Ox with 26 saves.

“It’s way harder standing on the bench than it is playing in a game, that’s for sure,” said Jr. Coyotes head coach Shane Doan, who retired after 21 seasons in the NHL. “But I’m so happy for the boys. They’ve been working hard and it was good to see them being rewarded for it.”