Girls Tier I 14U Notebook: Final day of pool play

Saturday’s scenario was certain for the Anaheim Lady Ducks. They needed a regulation win combined with a Chicago Mission regulation loss to advance from the Girls Tier I 14U Olympic Pool into the tournament quarterfinals.

It was a familiar situation for Lady Ducks head coach Laura Veharanta, 27, who led Anaheim to USA Hockey’s Girls Nationals last year and also skated in the tournament herself with the California Selects on three occasions, including in 2006, when the Selects made it to the 16U title game before falling to Assabet Valley.

“Those are your best memories from childhood, coming to Nationals with your friends and all the excitement of it,” said Veharanta, who played collegiately at Providence College before returning home to California after earning a master’s degree in 2014. She soon signed on to coach with the Lady Ducks, getting her first taste of Nationals from behind the bench last year. A handful of players from that team were back this year, but largely it was a new group of players from 12U AAA and 14U AA making their initial appearance.

They faced a stern test Saturday, especially during a tense 5-on-3 shorthanded situation midway through the third period when Anaheim led by a scant one goal.

“We don’t get to practice that a lot, especially with the high stakes of a 2-1 game at Nationals, so for them to execute that, it was good momentum,” said Veharanta.

The Lady Ducks survived the penalty kill, then struck for an insurance goal from Lisa Ito-Bagshaw to skate away with a 3-1 win over the Madison Capitols. The victory kept hope alive for Anaheim, which lost to Assabet in its tournament opener before bouncing back with a 1-0 shootout win over Chicago Mission yesterday. Unfortunately for the Lady Ducks, as they were defeating Madison, Chicago topped Assabet 1-0 in a shootout on an adjacent rink. That Mission win ended Anaheim’s run at Nationals, but not the impact of the lessons learned.

“Just letting them know they have the skills to come out here and compete with these really good teams and giving them that confidence and helping them believe in themselves and each other is important,” said Veharanta. “Going out there as a team from California, a lot of teams out here kind of mark us off, like ‘Oh, we’re just going to get the win in this game,’ but we put ourselves up against those teams and showed we can compete.

“They’ve done a good job and they’ve had fun with it, so I’m happy for them.” 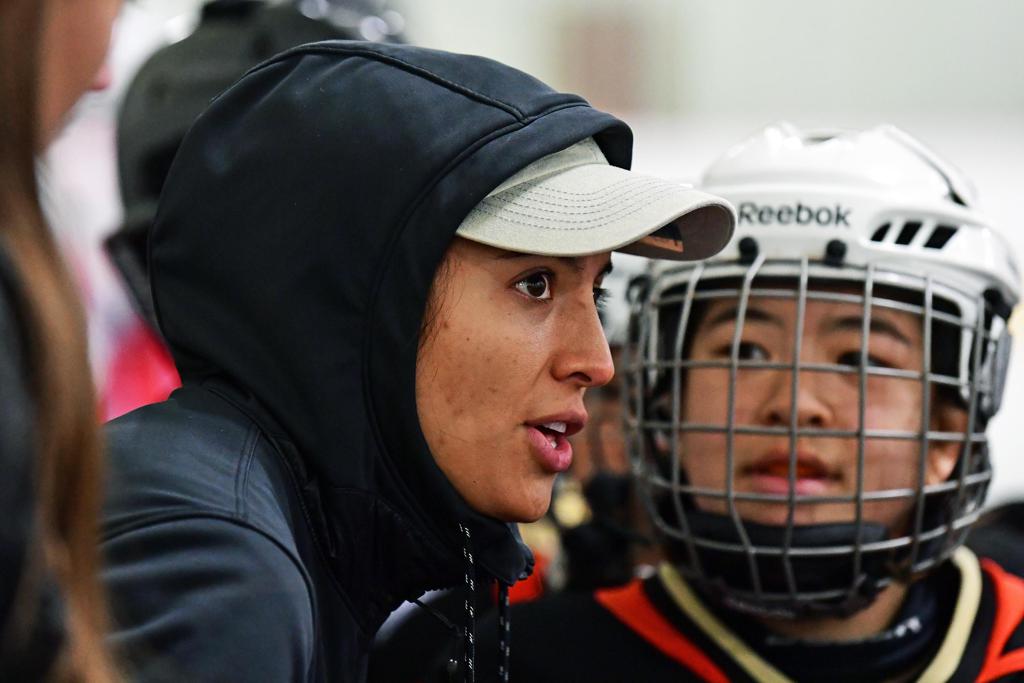 Anaheim Lady Ducks head coach Laura Veharanta helped guide her squad to a 3-1 win over the Madison Capitols today. The former Providence College Friar played at Nationals in 2006, 2007 and 2008. (Photo by Dan Hickling)