Unfortunately for the New Jersey Colonials and Michigan’s Belle Tire, the Tier I 16U Liberty Pool was upset-free this year. The fourth-seeded East Coast Wizards and fifth-seeded Shattuck-St. Mary’s Sabres held serve, which left the Colonials and Belle Tire still seeking a victory on the final day of pool play. They met Saturday in a lunchtime matinee that couldn’t have been more evenly matched.

New Jersey, the No. 13 seed, and Belle Tire, the No. 12 seed, entered play with identical records and near-identical goal differentials. After one period head-to-head, they were tied 1-1. After two periods, they were tied 2-2. After regulation, they were tied 3-3. After overtime, they were still tied. After a five-player shootout, the margin of difference was a single goal – scored off the post by Belle Tire’s Makenna Wiljanen – and a flawless five saves from goaltender Samantha Miller to give the Detroiters a 4-3 victory.

“In the shootout, I like to just slow it down in terms of thinking about it,” said Miller. “It’s just one shot, one shooter at a time. You can make up a strategy, but there’s really no strategy at all. I just focus on the puck. You can’t anticipate, because if you over-anticipate, it goes in every time.”

Miller’s had a fair amount of practice in the Nationals’ spotlight. This was her fourth trip overall and her second at Tier I 16U. She also made it twice at 14U, advancing to the semifinals two years ago.

“It’s definitely a different atmosphere at Nationals,” said Miller. “It’s a lot more nerves, a lot more hype. There are so many teams and players that work so hard to get here. It’s a rush.”

And while they hoped for a better result in the final tournament standings, the Belle Tire girls will certainly savor winning their last game of 2017-18 and using it as a springboard for the future. As for Miller, she’ll soon shed her goalie gear and morph into a lacrosse midfielder for a few months before returning to the ice.

“I have to score goals sometime,” she said. 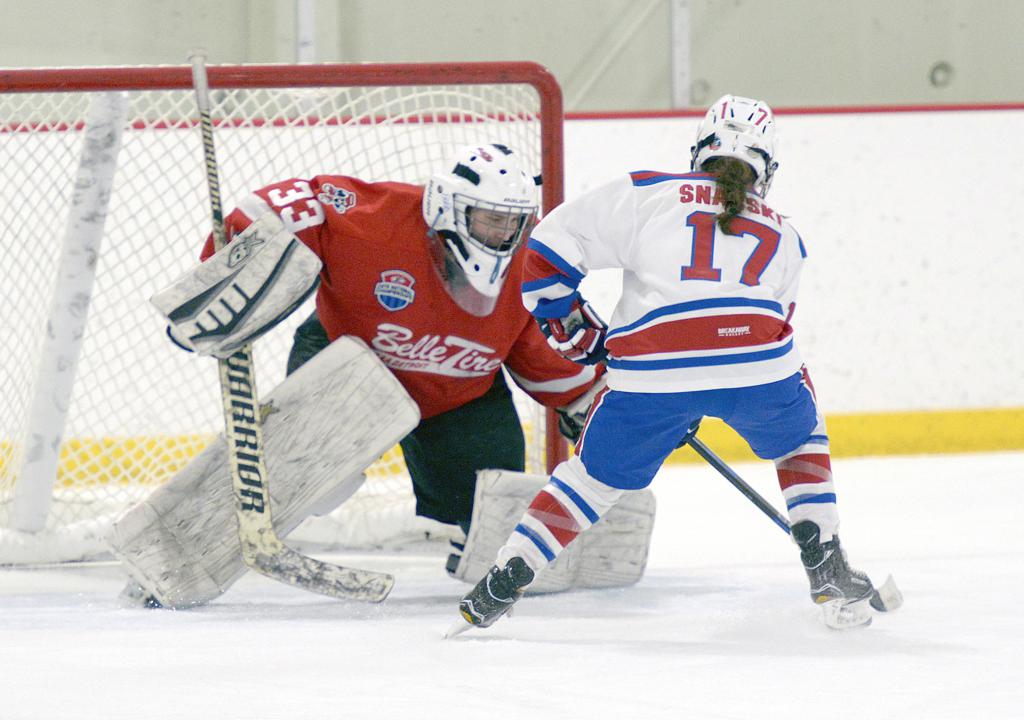 Belle Tire goaltender Samantha Miller denies Carly Snarski of the New Jersey Colonials during Saturday's shootout. Miller was a perfect 5-for-5 in the shootout.