Desert Dogs One Win From Finals 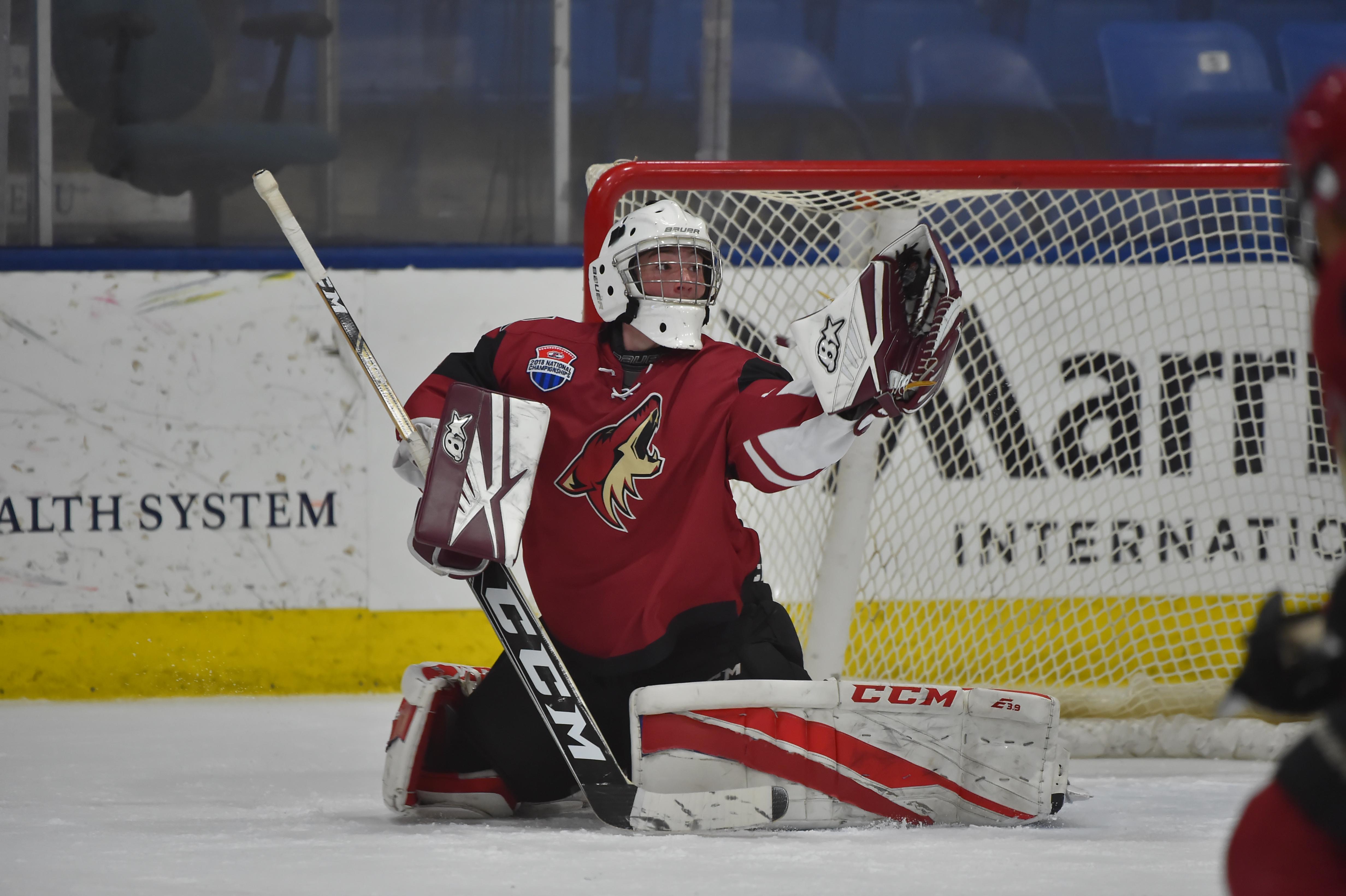 PLYMOUTH, Mich. – In some circles, 13 is considered an unlucky number. For the Phoenix Jr. Coyotes, it’s been a rallying cry that has propelled them past some pretty good teams here at the USA Hockey Tier I 15 Only National Championship tournament at USA Hockey Arena.

When the tournament seedings were announced, the Rocky Mountain District champions felt they should have been looked at in a better light. But that’s the way the chips fell and Coyotes head coach Shane Doan used the ranking to motivate his players to show the rest of the USA Hockey community what is taking place in the desert southwest.

After knocking off teams from Connecticut and Minnesota in the preliminary round, the Coyotes set their sights on another team hailing from a hockey hotbed, the Oakland Jr. Grizzlies from Michigan. And despite a few anxious moments, the Coyotes sent a message that they won’t go down without a fight with a thrilling, 7-5, quarterfinals victory.

“It’s not the way we drew it up, but at the same time it’s a good win for us,” said Doan, who retired at the start of the year after 21 seasons in the NHL.

Next up for the Coyotes will be a date with the tournament’s No. 1 seed, the Buffalo Jr. Sabres, who continue to live up to their top billing after knocking off western New York rivals, the Rochester Coalition.

The Jr. Coyotes and Jr. Sabres have faced off twice during the season with each side skating away with a victory. Their semifinal clash will be more than just a rubber match, as a spot in Tuesday’s finals hangs in the balance.

Phoenix got off to another fast start as Timmy Treadway’s shot from the point worked its way through traffic and surprised Grizzlies goalie David Filak. They quickly made it 2-0 when Riley Stuart took a pass from Matthew Knies and roofed it over Filak’s shoulder.

“Our coach has really stressed how important it is to start well and make sure they know we’re coming,” Knies said of the Coyotes penchant for fast starts.

The Grizzlies cut into the lead when Tanner Dickinson converted a Nicholas Chmelevski, but Phoenix extended the lead on goals from Ethan Eddleblute and Coleton Panowyk.

The Coyotes kicked it into high gear in the second period on goals from Riley Stuart and Knies to drive Filak to the bench in favor of Cullen DeYoung. The change in goaltenders got the attention of the Grizzlies, who clawed their back into the game on pair of goals from Ryan Beck and a solo marker from Matthew Shaw.

That’s when the wheels came off the Grizzlies comeback express as untimely penalties halted any momentum as the Coyotes managed to put the game away.

“A one-goal lead and three minutes on the power play heading into the third period of a quarterfinals game at Nationals is something we’d take that every day,” said Doan, who prompted his players to keep their heads up in the face of the Grizzlies late push. “You can’t do anything about what happened so you just have to stay positive and keep moving forward.”

That’s been the key to the Coyotes success all season. They’ll need that against the Sabres, who have lived up to the No. 1 seeding. For the kids from Phoenix, it’s another chance to take down a team from an established hockey hotbed and show what has been blooming in the Arizona desert.

“We were kind of upset that we were ranked 13th coming in but Arizona has some great hockey players and this has been a fun year,” Doan said. “We’ll just see if we can keep it going.”

With 12.1 seconds left in their season, Anton Sorensen jammed home a pass from Luke Wellandt to keep the Chicago Mission’s championship hopes alive. Then in overtime, Sorensen found Nicholas Urtis, who slipped behind the defense and beat Bennett Jung high to the glove side for a thrilling 2-1 victory over CCYHA.

“Sometimes you get lucky,” said Mission head coach Michael Pivonka. “You pull the goalie and see what happens.”

Justin Gordon’s first-period snipe beat Matthew O’Donnell to give CCYHA an early lead and Jung looked like he was going to make it stand up. But with O’Donnell on the bench, the Mission pressed the play and managed to finally sneak one past Jung, who finished the game with 34 saves.

The win sets up a semifinal matchup of perennial youth hockey powers the Mission and Little Caesars.

The Buffalo Jr. Sabres continue to find themselves in an early hole in the tournament and each time they manage to dig their way out and cruise to victory. Today it was against western New York rival Rochester Coalition, who scored two minutes into the game. After that it was all Sabres as Matthew Yeager scored the first of his two goals in the game to lift his gave the top seed in the tournament to a 4-1 quarterfinal victory. Eamon Powell’s goal gave the Coalition a short-lived lead before  James Chmurzynski. Austin Robinson added an insurance marker in the second and then put the game in the capable hands of goaltender Luke Pavicich, who stopped 25 of the 26 shots.

Kienan Draper’s overtime goal put a dagger in the championship hopes of the Mercer Chiefs, who rallied from a three-goal deficit but came up just short against Little Caesars. Jonathan Ritter’s goal in the final minutes capped a furious comeback for the Chiefs and set up the extra session where Draper picked up a rebound of a Tanner Kelly shot and slipped it past Jeremy Siegel for the winning goal. Benjamin Schoen added a pair of goals for Little Caesars, who will meet the Chicago Mission in the semifinals. Aidan Trainor had two goals and an assist to spark the Chiefs attack.