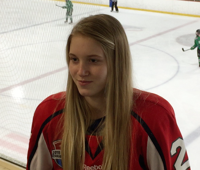 Thanks to a 4-1 opening-game win over the Princeton Tiger Lilies and a point gained against Brewster in a shootout, Team South Dakota qualified for the quarterfinals at USA Hockey’s Girls Tier II 16U Nationals. It’s a step in the right direction and a step farther than South Dakota advanced last year, when those same Tiger Lilies blocked the path.

Kaitlyn Holland was there for both tournaments. Through three games in Marlborough, the 15-year-old from Aberdeen has a team-leading four points (1G, 3A) and a rapidly growing resumé at USA Hockey National Championship Tournaments. Two weeks ago, she was in Minnesota for the first-ever Girls Division playoff at USA Hockey’s High School Nationals. There she skated with her Aberdeen Cougars, scoring a goal each against the eventual finalists – Minnesota’s Premier Prep Green and Premier Prep Black.

“It was fun during both tournaments, because there are many different teams, different opportunities and different skill levels,” said Holland, who followed in her older sister’s footsteps and began skating at age 3. “We got to experience a section of each throughout the two tournaments, which has been good.”

Aberdeen won its finale at High School Nationals, topping the Monarch (Colorado) Coyotes 3-2. That taste for victory carried over for Holland, who posted a three-point game (1G, 2A) Thursday in South Dakota’s Tier II 16U win over Princeton.

“It’s definitely better winning,” said Holland. “But either way, it’s still fun. Meeting new people is one of the best parts. I’ve met one of my best friends through playing with these (Nationals-bound) teams, so that’s fun no matter what.”