They began as elementary school hockey rivals, then they joined forces. Now, as teammates at Andover High School, Gabby Krause and Peyton Hemp have taken their show on the road with Minnesota’s Green Giants at the USA Hockey Girls Tier I 14U Nationals in Marlborough, Massachusetts.

As closely linked as they’ve been through the years, it should come as no surprise after today’s 5-3 quarterfinal victory against Chicago Mission, that Krause and Hemp are also tied for the tournament goal-scoring lead with five goals apiece.

It was Hemp’s turn to shine today, as the 14-year-old forward erased a 2-1 Mission lead with a bar-down wrist shot to even the score with one minute remaining in the first period. She added two more goals in the second period to complete the natural hat trick and lead top-seeded Minnesota to tonight’s semifinals.

“We’ve got four lines, they all can play and we were all just rolling and working hard, keeping on our forecheck, and that was my favorite part about today – we played a good team game,” said Hemp.

As for her three goals, Hemp said she’s been practicing the skill of shooting with her head and eyes up, and it paid dividends today as she picked open corners. The Green Giants needed every one of them to outpace Mission, which took two first-period leads on goals from Ashley Bialas surrounding a Minnesota goal from Madelynn Jurgensen. Hemp assisted on the Jurgensen’s goal, then erased the Mission lead, eventually staking the Green Giants to a 4-2 margin. Minnesota’s Madison Kaiser provided some insurance with 1:40 remaining in the third period, being awarded a goal after drawing a penalty while closing in on an empty net per Rule 616. The Mission added a power-play goal from Margaret Korneta in a penalty-filled last minute, but couldn’t get any closer.

With the victory, Minnesota advances to face the fourth-seeded Chicago Young Americans in tonight’s Girls Tier I 14U semifinal. CYA advanced with a 1-0 double-overtime win over the Pittsburgh Penguins Elite this morning.

Hemp isn’t looking beyond CYA, but like everyone else here, she’s definitely excited about the notion of playing for national bragging rights.

“At Nationals, it’s a chance to be the best at your age group in the whole country and that’s a big deal,” she said. “It’s awesome.” 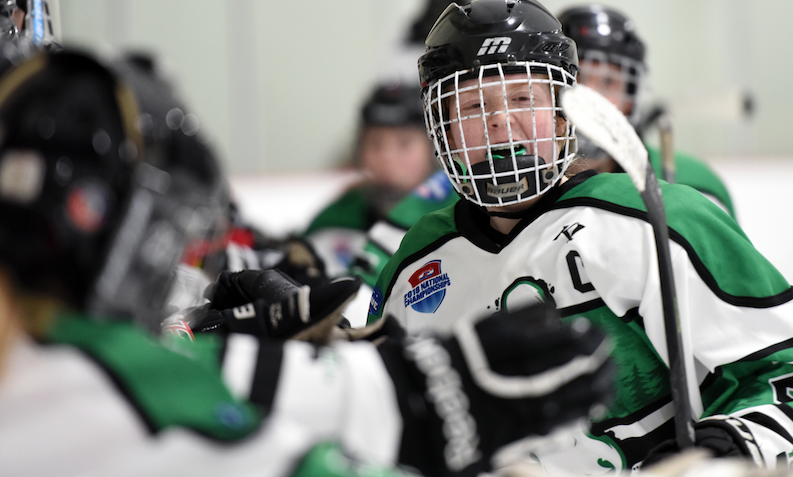 Minnesota Green Giants forward Peyton Hemp celebrates with her teammates after scoring against Chicago Mission. Hemp scored three goals and added an assist to lead Minnesota into the semifinals. 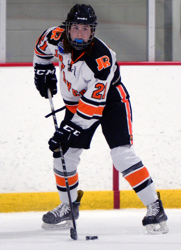 Mid Fairfield Stars (Connecticut) 0, Assabet Valley (Massachusetts) 2 -- Goals from Emerson O'Leary and Sophia Ensley provided all the offense and Abigail Hornung stopped all 13 shots she faced as second-seeded Assabet Valley cruised into the semifinals with a 2-0 win over Mid Fairfield.

Philadelphia Junior Flyers 5, Detroit HoneyBaked 4 -- Grace Dwyer's second goal of the game, coming with less than five minutes remaining in regulation, pushed the No. 12-seed Philadelphia Junior Flyers past No. 3-seed HoneyBaked and into the semifinals against Assabet Valley. Her pair of goals boosted Dwyer into the Girls Tier I 14U goal-scoring lead with six in four games. She's tied for the tournament's overall points lead (8) with Minnesota Green Giants forward Peyton Hemp.