PLYMOUTH, Mich. – In the woulda, coulda, shoulda world of youth hockey prognostication, complaining about a team’s seeding is a rite of passage.

But every so often the people who spend countless hours combing through season records, head-to-head matchups and strength of schedules as they perform the tedious task of putting a tournament together prove the naysayers wrong and the top two seeds live up to their top billing.

The Buffalo Jr. Sabres and Little Caesars did just that this week, brushing aside any and all competition on their way to tomorrow’s title game at the USA Hockey 15 Only National Championship tournament.

“The odds were that it was going to be us and them in the finals, and everybody’s looking forward to it,” said Jr. Sabres head coach Jacob Brozyna. “It’s going to be a battle.”

The teams met earlier in the year at a showcase event in Taylor, Mich., where Kris Draper’s charges manhandled the Sabres in a 6-1 win. A lot of hockey has been played since then and both teams will present a different set of challenges this time around.

“We played them earlier this year and it didn’t go so well, but we’re coming at them hot and we’ll give them everything we got,” said Sabres forward Declan McDonnell, who is tied for the tournament lead with 11 points.

“We’re playing at the top of our game right now and we’ll give them everything we got and hopefully we’ll come out on top.” 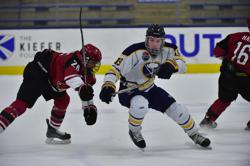 It’s hard to find fault in the Buffalo Jr. Sabres performance here this week. The No. 1 seed has lived up to its top billing, dispatching any and all comers. If there is one area head coach Jacob Brozyna wanted to clear up heading into the semifinals it was his team’s slow starts. In each of its four previous games, the Jr. Sabres have surrendered the first goal of the game.

Whatever Brozyna said leading into the team’s semifinal game against the Phoenix Jr. Coyotes, his team listened as it put together a solid 51-minute performance that left their coach’s voice a little horse but he was certainly happy with the effort.

“We gave up one power-play goal but other than that I was telling our guys that the back pressure was good, our D zone was tight and we out-chanced them when we got the puck down low,” Brozyna said. “I just thought it was ultimately a complete game.”

The Sabres finally got on the board with 11 seconds left in the first period when Blake Humphrey took a pass from Ethan Bishara and beat Hall to the glove side.

The Coyotes tied it up early in the second period when Tim Treadway’ point shot was tipped in front and was in the net before Luke Pavicich could even flinch. That was the only blemish on what was otherwise a stellar performance for Pavicich, who made 21 saves including several big stops with the Coyotes scratching at the door late in the game.

“Luke played great today,” Brozyna said. “He gave up one power-play goal that he didn’t see. Other than that, he came up with some big saves, especially at the end when they had a 6-on-4 [advantage].”

McDonnell scored his tournament-leading sixth goal when he ripped a bullet past Jake Hall, who once again kept the Coyotes within striking distance until a late power-play goal from Jacob Zwirecki gave the Sabres some breathing room.

It’s been a long season for the Sabres, as it has been for all the teams playing this late into the season. But this tight-knit group feels like it’s just hitting its stride at the right time. They know their last game of the season could very well be the most difficult challenge they’ll face all year. But looking around their locker room, this is a team that is playing fast and loose and ready to take on all comers. 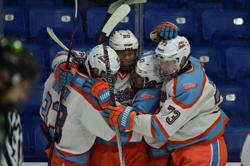 After surviving a scare against the Mercer Chiefs in the quarterfinals, the second-ranked Little Caesars squad made sure they didn’t take their foot off the gas against the Chicago Mission and cruised to an impressive victory.

“Yesterday was a character, resilient win. I think it says a lot about this group and how they responded and what they were able to get done and put ourselves in today’s semifinal game,” Draper said after his team surrendered a 4-1 lead in the third period against the Mercer Chiefs and need overtime to keep their tournament hopes alive.

Gabriel Bennett gave Little Caesars a 1-0 lead late in the opening period when he cruised down the left flank and beat Mission goaltender Matthew O’Donnell through the five hole. A pair of second-period power-play goals from Mark Estapa and an even-strength goal from Tanner Kelly provided Hunter Garvey with more than enough offensive support.

“We were good today,” Draper said. "I thought our goaltender came up with some timely saves and our power play was pretty good today. Our special teams have to be excellent and obviously you need great goaltending and timely scoring if you’re going to be successful at this time of year.”

Maxwell Itagaki netted his tournament-tops eighth assist when he set up Matthew Romer for a one-timer that beat Garvey for Mission’s only tally of the afternoon.