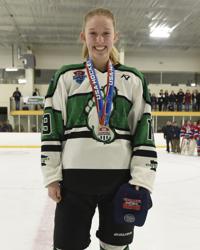 Andover High School defenseman and cross-country runner Joslin Mumm proved the unlikely hero. She hasn’t scored since December, and on a team with three of the national tournament’s top four scorers (Peyton Hemp, Gabby Krause and Madison Kaiser), her role was primarily goal prevention. But against Assabet, she collected a pass from Krause with 21 seconds remaining in the first period and zipped a long wrist shot past goaltender Abigail Hornung to give the Green Giants a 1-0 lead they never relinquished.

When she woke up this morning, did she think she’d be the one to score a national-championship winning goal?

“No, I did not,” said Mumm. “But it was such a good pass from Gabby. I had an open lane, so I just went for it and it happened to go in.”

Minnesota goaltender Hannah Skavnak protected the lead with 15 saves to earn her second shutout of the tournament. Lily Mortenson added an insurance goal late in the third period and Danielle Burgen scored into an empty net to seal the Green Giants’ victory, a Minnesota triumph that snapped a streak of four straight Girls Tier I 14U national championships for Massachusetts-based clubs.

“We all just worked as a team,” said Mumm. “Our coach has a saying, ‘Sacrifice the me for the we,’ so we all followed that and worked together really well and made the simple plays today.”

It added up to a championship performance for the girls from Minnesota.

“It's indescribable,” said Mumm, with a fresh USA Hockey gold medal dangling from her neck. “It's just a great feeling and awesome memory that I won't forget.”