MARLBOROUGH, Mass. – Abbey Levy is good with numbers. Really good. Teammates go to her for calculus help, and she can help you, too, if you ask. She knows a lot of relevant numbers. For instance, she’s 73 inches tall, the 3-1 lead is the worst lead in hockey, and her Shattuck-St. Mary’s team traveled 1,370 miles by bus from Minnesota to arrive at USA Hockey’s Girls Tier I 19U national championship game against Belle Tire of Detroit. 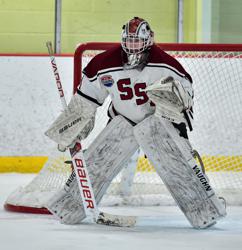 Levy won’t tell you much about her numbers, though, except for admitting that her tournament goals-against average is pretty easy to calculate (it’s approximately 1.00).

The New York native played to her average Monday, allowing only one goal as Shattuck-St. Mary’s cruised to its third consecutive Girls Tier I 19U national championship and eighth overall with a 5-1 win.

“My team worked hard; they really pushed forward for us,” said Levy, who made 19 saves. “They did it all for me behind the net. I really couldn’t have had it any better with how they worked and how they kept going right to the end. They didn’t give up. I wouldn’t have been able to do what I did without my defense and my forwards.”

The Sabres sliced early against Belle Tire, scoring the game’s first goal midway through the opening period on a shot from Minnesotan Sydney Breza. Belle Tire responded with a second-period surge, but Levy did some of her finest work and maintained the Shattuck-St. Mary’s lead. Then Maggie Connors scored to extend the Sabres’ advantage. Texan Hannah Bilka tallied early in the third period to make it 3-0 before Belle Tire finally answered on the power play with a sizzling short-side shot from Abby Latorella at 9:45.

But Levy’s dreaded 3-1 lead didn’t last long. Minnesotan McKenzie Hauswirth, the tournament’s leading scorer, quickly added a goal on brilliant rush and finishing deke to make it 4-1, and then a late empty-netter from Emma Kee provided the final margin of victory.

As Sabres head coach Gordie Stafford helped his players count the final minutes by dwindling miles, he reminded them to have fun with whom they’ve traveled, not just to Massachusetts, but to the end of their prep school hockey journey.

“What makes our team special is that we’re a school, you know, and you have seniors there and they’ve been together a long time,” said Stafford. “They give up so much to pursue their passion. So for me, the most important thing is to hop over the boards and say ‘I love this game’ every time they go out there, and then, these are the friends they’re going to have for life, so it’s not even about the game, it’s about looking at each other and saying, ‘Let’s go have some fun.’ I think that’s the best way to go about it.”

As for how his Sabres went about it at Nationals, Stafford was most impressed with their calm.

“We’ve had teams in the past that won, but this one, we were just like a machine,” he said. “We just got better all week. And we’re relatively young. We’ve only got eight seniors, and that says a lot about this team’s maturity as a group.”

SSM counts down to the championship