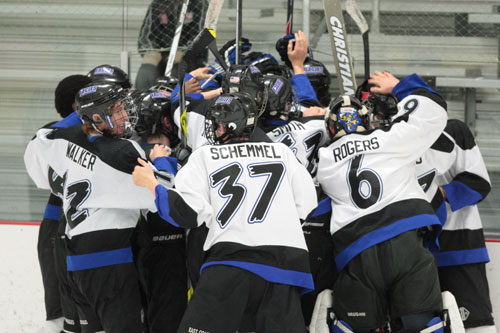 In the 2A Championship Matt Fuller scored on a rocket slapshot that just cleared the shoulder of goalie Josh George to power the Raleigh, NC-based East Coast Eagles past the Arizona Hockey Union at the 4:22 mark of the first overtime.  Each team traded goals through the first two periods then played a scoreless third prior to the Eagles OT heroics that produced the final margin, also at 3-2.

In the closing game of the tournament Jack Oberg  had two goals and three assists and Zachery Bettmeng added two and two as Team South Dakota scored three times in both the first and second periods and cruised to a 7-1 win over the Delaware Ducks to decide the Division 1A title.

In the Division 1A semifinals at the Ashburn Ice House, the Delaware Ducks came back from a 3-1 third-period deficit to pull out a thrilling 5-4 OT victory over the Huntsville Chargers. After roaring back to tie the game at three, the Chargers converted a penalty shot with less than four minutes left in the contest to regain the lead.  However, the Ducks sent the game into extra time with under three minutes in regulation and scored the game-winner at 3:53 in OT to advance to the championship game. Team South Dakota jumped out to a 3-1 first period lead which lasted until the closing moments of the game when Will Radovan scored his second of the contest to draw the Park City (UT) Miners within one but Dakota hung on to earn the championship berth.

In Division 2A, the NoVa Ice dogs dominated the first period while taking a 2-0 lead over the East Coast Eagles but the Carolina team remained resilient, eventually taking a 3-2 lead with five minutes to play in the second.  The game remained tight for much of the third until the Eagles posted an insurance goal with six minutes left, then added two late scores to seal the win.  In yet another spectacular matchup, Michael Boyle converted a backhand deke on a breakaway just :30 into overtime to lift the Arizona Union Knights to a 4-3 win over the Red Bank (NJ) Generals.

In the 3A bracket, the St. Lawrence (NY) Thunder remained unbeaten at Nationals and secured their place in the finals with a 3-2 victory over the Dallas Penguins. Dallas jumped ahead 1-0, but the Thunder, who entered the competition with a #14 national ranking, countered just 18 seconds later and added two second-period goals to pull out the win.

The Oakland (MI) Jr. Grizzlies meanwhile won 4-3 in a hotly contested back-and-forth Midwestern showdown over the Highland Park (IL) Falcons. The Grizzlies scored the go ahead goal late in the third to secure their berth in the finals.

When the Northern Virginia Ice Dogs met the Portland (OR) Jr. Hawks in the final preliminary round game of the Tier II Division 2A 16U National Championships at SkateQuest Reston, it was a winner-take-all affair.  Come out victorious and you advance to the tournament quarterfinals.  Fall short and home you go.  After taking an early 4-0 lead, the Ice Dogs watched the Hawks claw back to 4-3 before sealing the win with a late empty netter.

Fifteen miles away at the Ashburn Ice House the Delaware Ducks in Division 1A captured their elimination match against the Oklahoma City Oli Kings, building an early lead and then hanging on for the 5-3 win.  And with one game to play in Division 3A, the Toledo Cherokee defeated the Butler Valley (PA) Dawgs 3-2 in the final game of the day only to see the Dawgs advance despite three teams finishing with identical 1-2 record thanks to the magic of goal differential.

Such is the way of the National Championship Tournament where the difference between moving on, and shipping out can be as slim as a single goal or a diving save.

For teams like the St. Lawrence Thunder, the Dallas Penguins, the Red Bank Generals and five others who sailed through the first three days undefeated, they could afford a little breathing room.  But don’t tell that to the Ice Dogs, Portland Hawks, Cherokee, Ducks, Dawgs and Oil Kings.

For them, the playoffs started today.

PLAYOFF PICTURE BEGINS TO TAKE SHAPE AT 16U NATIONAL CHAMPIONSHIPS

Eleven teams will take perfect 2-0 records into Friday’s crucial third day of action at the 16U National Championships at SkateQuest Reston and the Ashburn Ice House in Northern Virginia.

Team North Dakota and the Park City (UT) Miners won their two opening round games in Division 1A; the Valencia (CA) Jr. Flyers, the Red Bank (NJ) Generals, the Arizona Hockey Union Knights and the East Coast (NC) Eagles were flawless in their Division 2A openers and the Michigan Ice Hawks, the St. Lawrence (NY) Thunder, the Oakland (MI) Jr. Grizzlies, the Dallas Penguins and Tampa Scorpions won their first two games in Division 3A to take leads in their  respective divisions.

But as is the case with most short tournaments, a 2-0 record guarantees nothing.  Teams with one win or a win and an overtime result after two days will often times overtake a higher standing opponent on the final day of play.

To that point, says Oakland Grizzlies Coach Brad Jones, “I’d rather be 2-0 than the other way around.”

With spots in the weekend’s playoff round on the line, Friday’s action is guaranteed to be fast and furious.

Division 1A will play their morning matches at the Ashburn Ice House to determine four playoff qualifiers from among the eight competing teams.  Division 2A will begin play at SkateQuest Reston at 8 a.m. with the final qualifiers determined by mid-afternoon while Division 3A starts play at Ashburn, with their eight playoff qualifiers solidified by early evening.

Quarterfinal play gets underway at both rinks Saturday morning with the semifinals scheduled for late afternoon and early evening.  The three championship games will take place Sunday morning at the Ashburn Ice House. 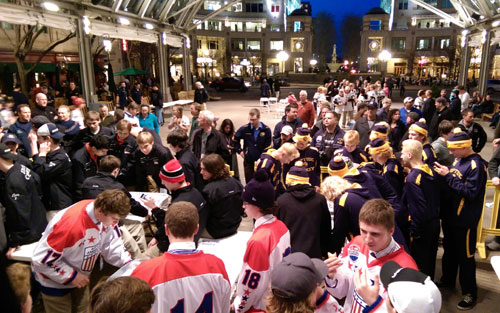 The Butler Valley Dawgs from Western Pennsylvania opened up a huge lead and then held on to post a 5-1 win over the Highland Park Falcons from suburban Chicago in the finals of the rod hockey tabletop tournament which took place in conjunction with Opening Ceremonies at the USA Hockey National Championships in Northern Virginia.  The Affton American overcame a 2-0 deficit to post a come from behind 3-2 win over the Northern Kentucky Norse to capture third place honors.
The top three teams took home gift certificates from Total Hockey, sponsor of the opening ceremony competition, along with one of the games.

All 40 teams at Nationals participated in the competition.  Teams played six minutes games with sudden death overtime in case of a tie.  One such game actually lasted 26 minutes when the South Boston Shamrocks faced the Delaware Ducks in the Round of 16.  The Shamrocks ultimately prevailed before falling to the Falcons in the Quarterfinals.   "The kids had a great time," said LincolnFlagg, coach of the East Coast Eagles from North Carolina, whose team reached the quarterfinals before falling to Butler Valley.  "It was a brilliant and unique idea for an opening ceremony." 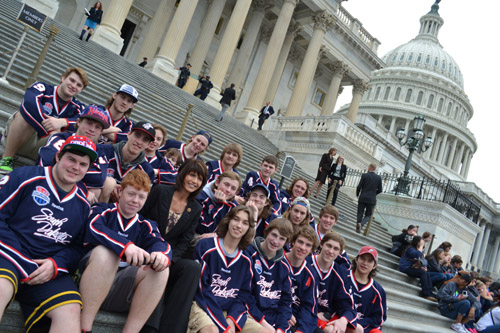 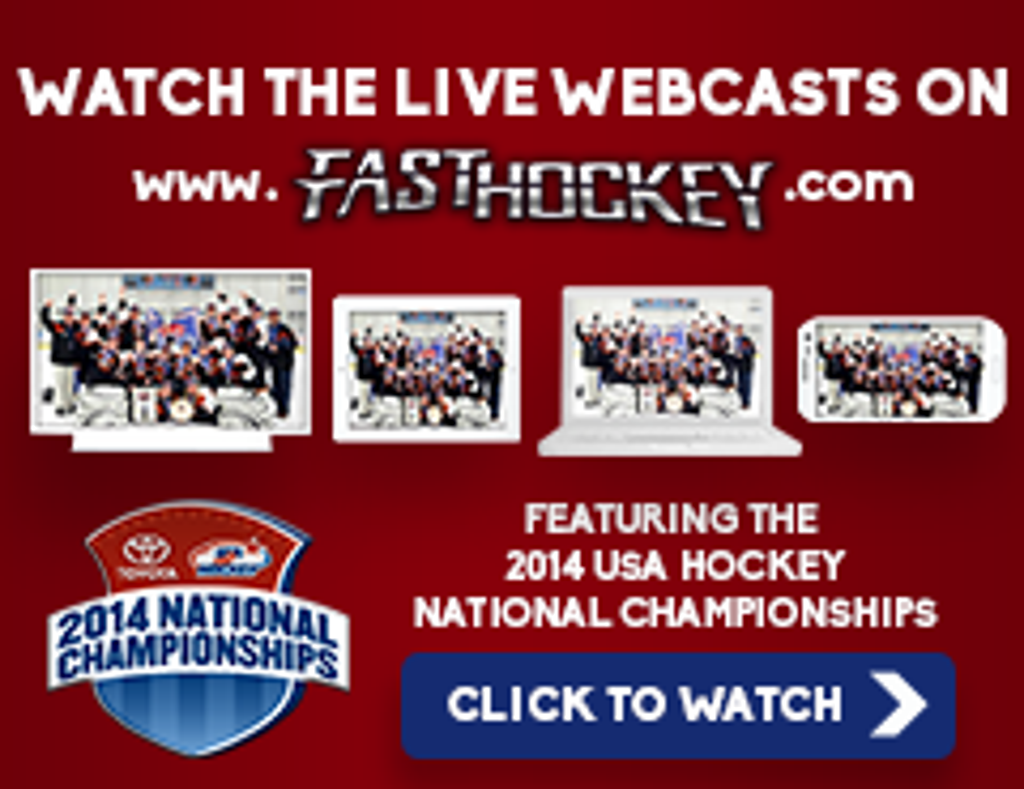 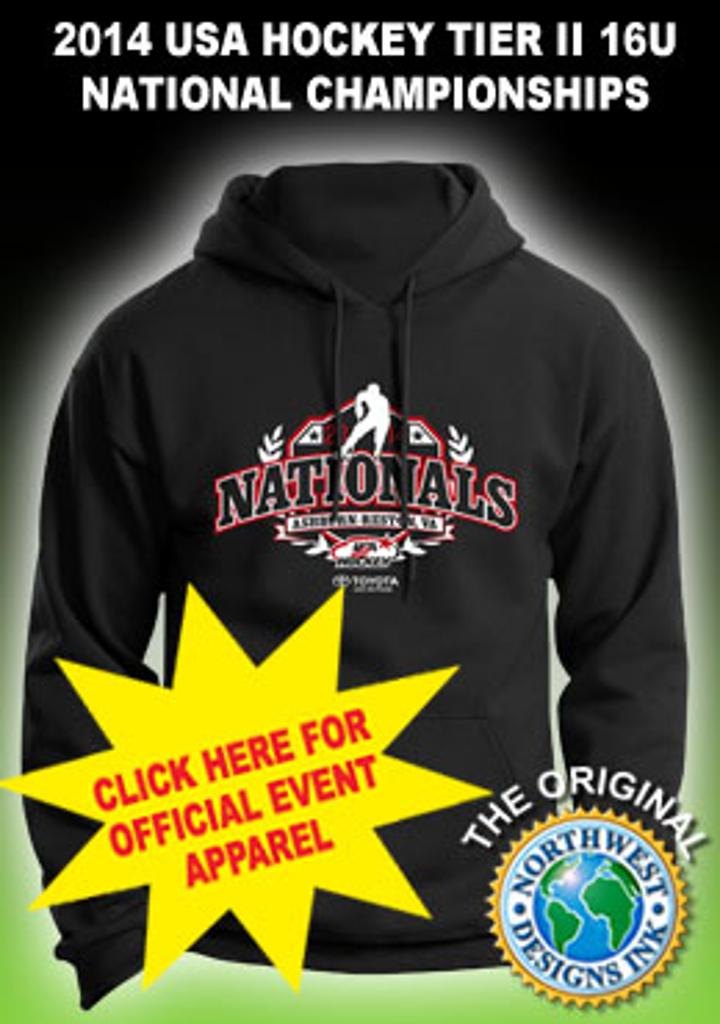