WESLEY CHAPEL, Fla. — Three Marines pushed each other as they recovered and adjusted to a life as double amputees.

While rehabilitating at Walter Reed National Military Medical Center, John Curtin, Ben Maenza and Joey Woodke discovered they had similar interests, interests that ultimately led to them becoming teammates on the ice.

Indeed, sled hockey has proved to be the ultimate bond for these men, injured within a roughly six-month period of each other bridging 2010 and 2011. They were in different combat units and did not know each other until meeting at Walter Reed.

Today, they are inseparable and found themselves in Wesley Chapel, Florida, last weekend for the 2019 Toyota-USA Hockey Disabled Hockey Festival.

“Hockey really gave us something that we were missing,” said the 30-year-old Maenza.

The three play for the Nashville Sled Preds. Maenze is a Nashville native. Curtin hails from Poughkeepsie, in New York’s Hudson Valley, and Woodke is from Michigan.

Growing up in Tennessee, Maenza did not know much of anything about hockey. Curtin played pond hockey when he was younger, but little more than that. Woodke is from Michigan, but hockey?

“I never really picked up a hockey stick until the first time we played sled hockey four years ago,” said the 29-year-old Woodke

In 2015 the Sled Preds played in its first Festival. To be together at this annual event is a special feeling as it evokes memories of the first one together.

“This tournament is really cool for us because this tournament was the first one we played four years ago,” said Maenza. “It was three guys, three buddies.”

It also showed the three of them that while they needed some work, hockey was going to be their sport.

“It opened our eyes to the game more than ever and I feel like we really took to it after that,” said Curtin, 29. “We were absolutely horrible. We were athletic and we were fast, but we had no other skills in our wheelhouse whatsoever. From that point to now has been quite a journey.”

The journey has taken the three of them and their teammates from the Tier V Division that first year in Buffalo to the National Division, which they are a part of for the first time this year.

“Each of the last four years we have been able to go up a division,” said Nashville coach and fellow Marine Keith Grooms, who had volunteered before taking over the team for the 2015-16 season. “We were usually getting our butts kicked for the most part trying to play up a division, but in the long run it has helped us. In four years we went from Tier V to now being in the National Division.”

In other words, Curtin, Maenza and Woodke have helped their Nashville Sled Preds go from fresh-faced rookies to playing some of the nation’s best sled hockey players in a four-year span.

But before they helped their team climb the ladder, even before they ventured onto the ice, Curtin, Maenza and Woodke were engaged in various athletic competitions.

“We went to physical therapy together,” said Woodke. “As we progressed, we would branch out and do different things like weight lifting and bike rides.”

The trio competed in numerous marathons such as hand-biking with the Achilles Freedom Team, a program that brings wounded veterans together and works closely with therapists at Walter Reed.

After leaving Walter Reed, the three went their separate ways, but met at the marathons and otherwise stayed in touch. With a strong bond between them, Woodke and Curtin ultimately moved to Nashville so the three could be close together.

That set the stage for their involvement with the Sled Preds. It was Maenza, the Nashville native, who got his buddies on the ice.

“We’re all living in Nashville and sitting around one day and Ben was like, ‘I tried sled hockey and you guys should come play,’” recalled Woodke.

So they did. They joined the Sled Preds and had only a couple of practices before heading to the 2015 Festival in Buffalo.

“John, Joey and I just kind of came together and we have been training and pushing each other forward,” said Maenza. “It’s fun to be here and be a part of it. We love it.”

The Nashville Sled Preds is a team that also features Michael Paul, a U.S. Army veteran injured in a non-combat accident, and Heath Calhoun, a U.S. Army veteran and double amputee who served in Iraq. Calhoun took up skiing before hockey and won silver in super combined at the 2014 Paralympic Winter Games in Sochi, Russia.

“When I came on board, I started talking to the guys and found out how many were veterans and I’m like, ‘This is really cool. I had no idea,’” said Grooms, who has been around hockey 30-plus years. “It has really been an awesome experience for me.”

It has indeed been awesome for Curtin, Maenza and Woodke to continue to thrive at a sport they have only been playing a few years.

“We were not hockey players four or five years ago and now we’re playing hockey at the highest level,” said Maenza. “It’s awesome being with these guys.” 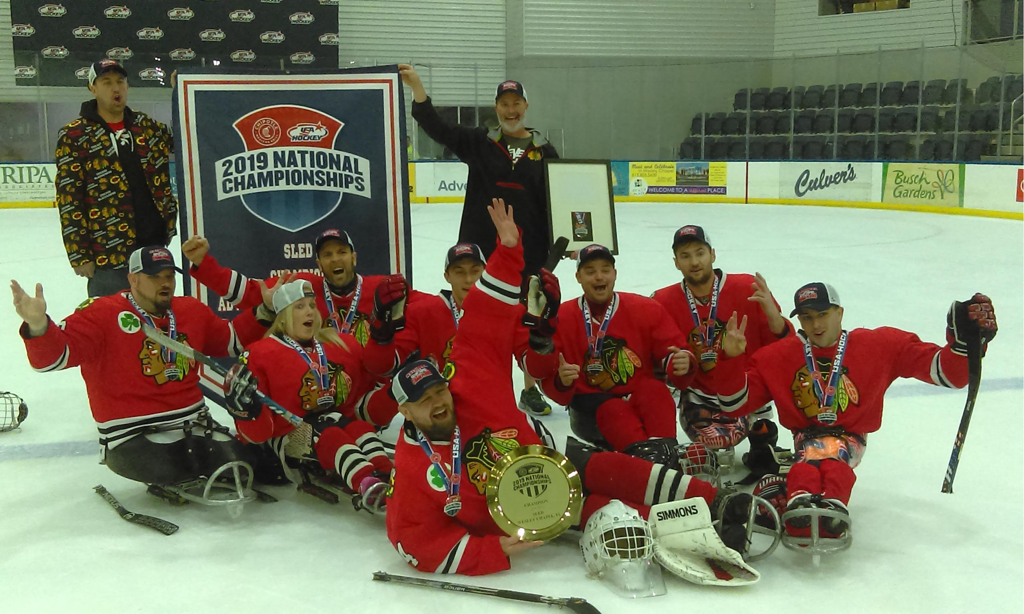