OMAHA, Neb. — Just before the high school hockey season was cut short last March due to the COVID-19 pandemic, the Omaha Junior Lancers were gearing up for a hopeful Chipotle-USA Hockey High School Division II National Championship run. A team that qualified on the very last day of the regular season, Omaha had an exciting ending to an emotional season.

However, that tournament never came to fruition.

It’s part of the one word that can be used to describe the past two seasons for the program — adversity.

“It’s been difficult, but adversity is really nothing new to us,” said head coach Nick Harrahill. “You’ve just got to keep going. We’re happy to be back here.”

This weekend will mark the first appearance on this stage for Harrahill as a head coach and the ninth for the program overall. He says he plans to treat it like any other weekend, but it’s a special opportunity to play at home in Omaha and something he wants his group to make the most of.

Around the midway point of this year, the Jr. Lancers saw their leading scorer and eventual team MVP, Trey Carlson, go down with an injury. Thursday night’s 4-2 victory over Osseo-Maple Grove (Minnesota) marked Carlson’s first game since Feb. 6.

“It’s been next man up all season long and that’s how it’s had to be,” Harrahill said. “We’ve had a lot of young guys step up into big-time roles and our team is really young, but everyone has stepped up when they need to.”

The Jr. Lancers put together a 29-9-1 record during the 2020-21 regular season campaign and grabbed one of the two Midwest High School Hockey League (MHSHL) spots for Nationals. The other one belongs to the Dubuque Saints.

Omaha is a team that focuses on strong defensive play and building from the net out, but it’s also been a team by committee in every sense. Harrahill said there’s been a different contributor on seemingly a nightly basis. 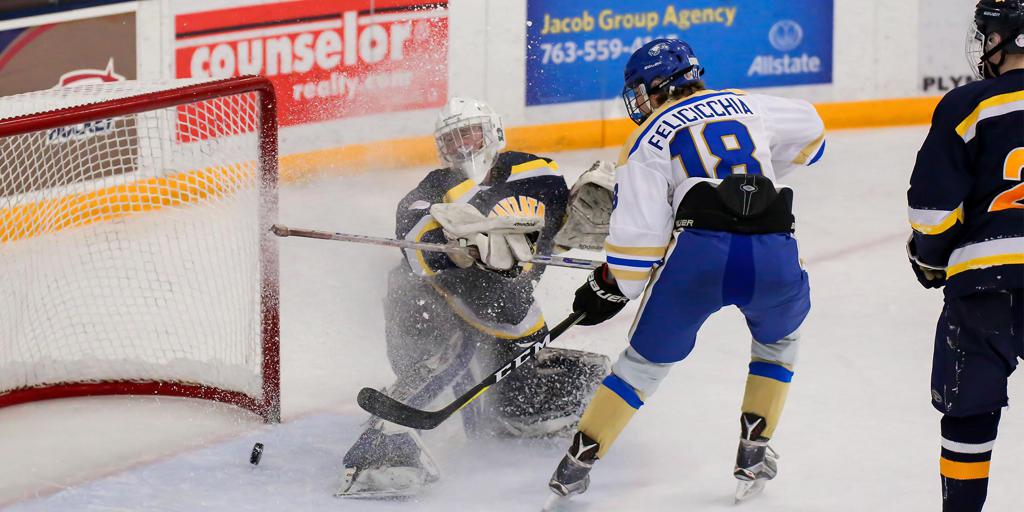 “Our team is unique. We didn’t have a single [MHSHL] All-Star for the first time since I got here at least [2014] and we’re truly a team that gets it done by committee. I think that’s something that’s really helped us.

“We run all four lines and our guys know they can count on the guy next to them to step up. But I think the thing that’s really set us apart is our goaltending and that’s how we’ve won a lot of games.”

They came into the weekend 19-0 this season when they’ve scored three or more goals, much of that thanks to the play of Jaden Salado and Nolan Eikerman between the pipes. That trend continued Thursday in a 4-2 win.

The head coach described Salado as the “difference-maker” as he turned aside 24 of the 26 shots he saw in a fast-paced game. Osseo-Maple Grove actually scored first, just 25 seconds in, and the Jr. Lancers fell behind 2-0 at one point. As has been the narrative all season long though, Harrahill’s team was able to respond.

As the city of Omaha hosts the event, Harrahill and his team won’t have to travel far this weekend. The first win moves them one step closer to their end goal, but as it’s been all year long, it won’t come easily.

Winning it in their own barn would make it that much sweeter.

“We know we’re going to have a lot of people out to support us, which is exciting, and it would be so special for our seniors to be able to go out on top,” Harrahill said. “They’ve been through a lot and done a lot to change the culture of this program.

“Doing it on home ice would just make it even more special though. To be able to celebrate in our house would mean the world to this team after everything we’ve been through the last couple years.”