OMAHA, Neb. — Win or lose, the Chipotle-USA Hockey High School Girls National Championship has presented one group from Anchorage, Alaska the chance to experience something they haven’t since the spring of 2020 — the chance to feel like a team again.

“It’s been great being able to spend that time together as a team here because we haven’t been able to do that much in Alaska,” said head coach Brian Gross. “We couldn’t even use any locker rooms this season, even for practice, so it’s been very difficult to bond. This weekend has already been great being able to spend so much time together as a team in the hotels and at the rink.”

As hard as it might be to believe, Thursday afternoon’s tournament opener also marked the first time the Anchorage team has played in an indoor rink all season. Due to COVID-19 restrictions in the state of Alaska, everyone has had to revert to hockey’s roots and play on outdoor rinks.

“It’s been difficult,” Gross said. “We weren’t allowed to play indoor games the whole season, but we’re very thankful that it has probably been the best winter in 15 years in Alaska in terms of weather and the outdoor ice was good.”

Gross estimated they were lucky if they had four indoor practices together back home this entire season. They practiced together Wednesday once they arrived in Omaha, but the logistical challenge of simply getting to town is just one of the stories of this weekend. At over 2,600 miles away from Nebraska’s largest city, the Anchorage team has made the furthest trip of any across all three tournaments to get to Nationals.

However, the extra travel is just the latest hurdle they’ve had to clear this season.

“We were lucky if we had one game with everybody there this season, and I’m not even sure if we had that, so it’s been difficult,” Gross said. “We struggled a bit at first this season, but the first period of this one was the best we’ve played all season. 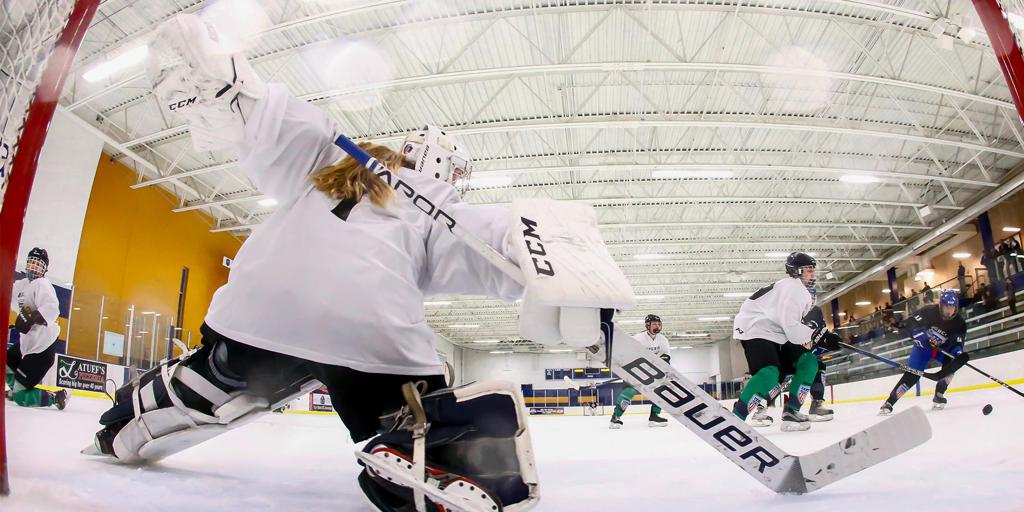 “It’s been a challenge, there’s no question about that, so I’m glad to see our girls coming together now. This has been the most challenging season in my 25 years of hockey.”

With all of the challenges they’ve faced this season, Gross’ roster couldn’t have picked a better time to come together. Anchorage skated to a 4-0 win over the Milwaukee Phoenix Thursday afternoon to begin tournament play.

The head coach described it as a “complete team effort.”

“I thought we came out flying at the start,” Gross said. “We played a fantastic first period and the girls did everything that I asked of them. We got a bunch of penalties in the second period and were kind of holding on for dear life for a little while there, but we were able to overcome it.

“We gave up a lot of quality shots, but our goalie [Zoie Campbell] played fantastic and shut them down. You never know when you come into a tournament like this how competitive you’re going to be or what this weekend will look like, so it’s nice to get a win and you want to enjoy it.”

On Friday, Anchorage suffered a hard-fought 1-0 shootout loss to Team Texas, but the team still has a chance to advance out of pool play and into the semifinals on Saturday.

It’s been a fantastic experience so far, but it’s just one win in what Gross hopes is a successful weekend in Omaha.

“This is just an awesome experience for the kids,” he said. “They get to play other teams from around the country, compete at a high level, and make memories that hopefully last forever. Especially considering what the past year has been like, it’s a great opportunity to represent Alaska high school hockey.

“You only get so many opportunities like this, so when they’re there in front of you, you’ve got to take them and do your best. We’re going to lay it all out on the ice, hope for the best, and see where the chips fall.”