A year of unknowns ended in perfection for Massachusetts club

OMAHA, Neb. - The Springfield Cardinals high school hockey team came into this past weekend with a perfect record in Massachusetts play. However, there were no guarantees getting to this point would even happen.

In a challenging season that saw local restrictions shorten their season, the Cardinals still were able to punch their ticket to the Chipotle-USA Hockey High School Division I National Championship.

After a 6-0 weekend, the Cardinals put a bow on their perfect season with a 3-0 win over New Trier, securing the national title.

“The whole year revolved around the word ‘if’,” said head coach Brian Foley. “We were registered and we were hoping to get here, because we knew this would be a great way to end the season with the very special team we have. It took a lot of effort by a lot of people, which we appreciate immensely, and I just think it was an awesome opportunity for these kids.

“I think it was the first time anyone from Massachusetts had made it, let alone us. I just feel so fortunate to able to participate and to win the thing makes it even more special.”

In what ended up being a low-scoring contest, Springfield jumped out to a 1-0 lead 3:27 into the game and stretched the lead to 2-0 at the 5:59 mark. Both goals came off the stick of Evan Phaneuf and were assisted by Matthew Burke.

From that point on it was a solid all-around effort that made the difference. Especially going into the third with a two-goal lead, the Cardinals made it a point to play sound defensively.

“We just wanted to make sure not to give them any breaks with odd-man rushes,” Foley said. “We know we have a great goaltender with Ben Zaranek, we know we’re tough to score against, and we’ve got six [defensemen] and 10 strong forwards.”

Zaranek stopped all 23 shots he faced in the championship game. The Springfield goaltender was a big part of the win, but Foley was especially proud of the effort by his entire group. The head coach said he could tell the team had what it took back at the start of the season.

“They’re an amazing team,” he said. “We knew we had something special at the beginning of the year and it was great that USA Hockey was able to put this great event together in this crazy year. For them to be able to have a chance to compete for a championship and win has been unreal.

“Today was an incredibly tough opponent, Edina was a tough opponent last night, and these guys haven’t lost a game all year. They just know how to dig down deep when we need it and play smart. They did a great job.”

Ryan Leonard gave the Cardinals some insurance and a chance to take a deep breath with an empty-netter in the waning seconds. That goal was the final exclamation point in the 3-0 championship win.

“It’s amazing,” Leonard said. “The boys have worked so hard all year for this and we accomplished it. It shows how powerful Massachusetts hockey is and how we represent ourselves here.”

This season has been anything but normal and once again, it goes back to the word ‘if.’ There were no guarantees this season would even happen, but to make the trip to Omaha and to go home with a championship banner, it has made it all worth it.

“These guys took advantage of the opportunity and I’m proud,” Foley said. “There was a lot of waiting this year — is it going to happen? Is the site going to change? When can we get plane tickets? All of those logistics. But it all turned out perfect. I want these guys to just enjoy the moment and it’s a great experience for them. I’m sure they’ll never forget it.” 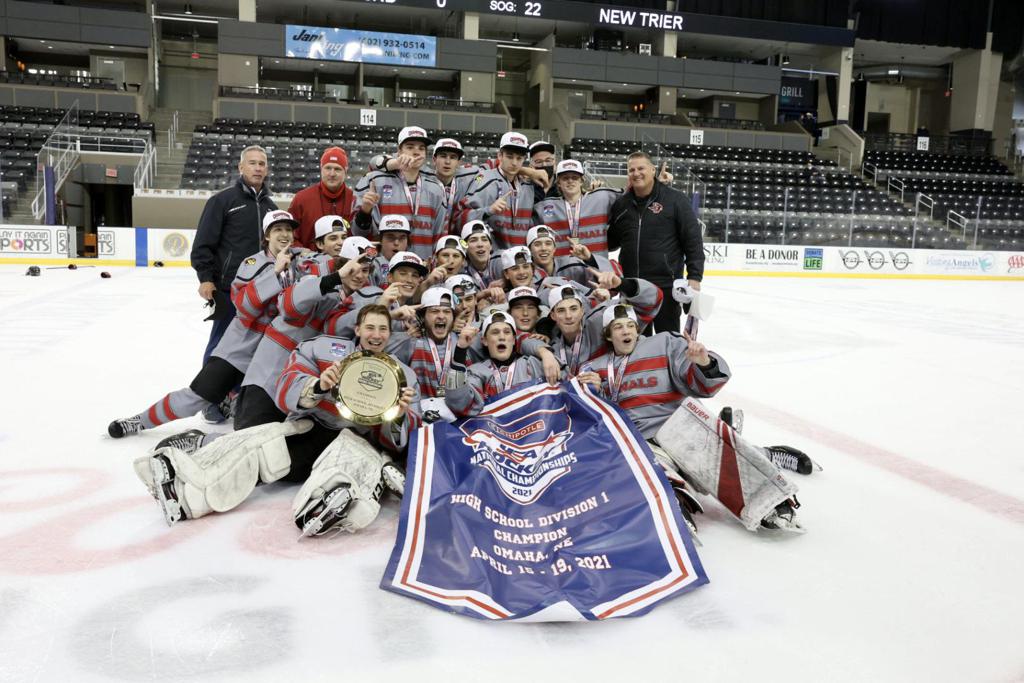