OMAHA, Neb. — There have been two trends for the Omaha Junior Lancers this season: they’re a resilient group and they win when they hit their magic number of three. Both of those were on full display Monday morning as the Junior Lancers rallied from a 3-0 deficit for a 5-4 overtime win over the Capistrano Coyotes in the 2021 Chipotle-USA Hockey High School Division II National Championship.

“I’ve said it before, but that was nothing new to us,” said Omaha head coach Nick Harrahill. “We’ve had our backs against the wall multiple times this year, but we just kept the positive vibes going. The energy was amazing and the kids just kept believing. When we scored our first goal that really gave us a lot of life, but we’re resilient. We knew we weren’t going to quit and that’s what we do.”

Brett Phillips gave Capistrano a 1-0 lead 3:57 into the championship and Merril Steenari and Makar Klochkov followed with goals of their own, giving the Coyotes a 3-0 lead at the end of one period. From there on out, five of the next six goals came from the Junior Lancers, with the home crowd growing louder after each tally.

The first one went in off the stick of Trey Carlson just 36 seconds into the second period.

“I got in the locker room and told the group if we score one more goal we’re at three. So we’d be down 4-3 at that point, but we know we don’t lose when we score three. That was our goal and we kept going from there.”

That late second-period goal Harrahill mentioned came when Timothy Johnson cut the lead to 3-2 at the 15:17 mark, and it seemed like the momentum was starting to shift. Omaha had controlled the play for much of the period. However, Klochkov answered with his second of the contest just 39 seconds later, stretching the Coyote’s lead back to 4-2.

Heading into the final period down by two, there was never a doubt on the Junior Lancers bench.

“All year we’ve been super resilient, and he just told us to keep doing what we’ve done,” said senior captain Gavin Moffet. “We put in two amazing goals to send it to overtime and we were able to win it, so it’s amazing.”

Karl Grafelman cut the lead to 4-3 just 55 seconds into the third period, and after a fortunate bounce with the Coyotes goaltender out of his net, Connor Szolek scooped up a loose puck and tied the game at 4-4 with a short-handed tally. That goal would force overtime.

“Once again I told the group we don’t lose when we score three or more,” Harrahill said of his message on the bench before the sudden-death session. “This team is just so confident and when we got it to overtime, we knew we were going to win the game. I don’t mean that in an arrogant way, but it’s just confidence.

“They deserved it, they earned it, and they believed even when we’re down 3-0. The bench was incredible and I’m just so proud of this team.”

After a back-and-forth exciting start to the overtime, it was Carlson who found the back of the net for his second of the game. The team’s MVP during the regular season, Carlson's biggest goal of the season sent the Ralston Arena crowd into a frenzy and gave the Junior Lancers their first national title.

“It felt great,” Carlson said of his goal. “Karl won a faceoff forward and I was able to get the puck on the net, so luckily it went in.”

For a group that’s been through so much the last few years, it’s especially a rewarding feeling to lift that championship banner.

Doing it on home ice also makes it that much sweeter. As someone who has spent eight years with the program and is active in the Omaha hockey community, Harrahill said it was surreal to see the support his group had on Monday morning. It’s something his group won’t ever forget.

“It just gave me chills,” Harrahill. “There were hockey parents I know, guys I used to play with, OJL alumni from 8-9 years ago supporting, everyone wearing their old jerseys, banging the glass and cheering us on. They gave us a spark and we couldn’t have done it without them. It’s just so special to win it on home ice and I couldn’t have asked for a better ending.” 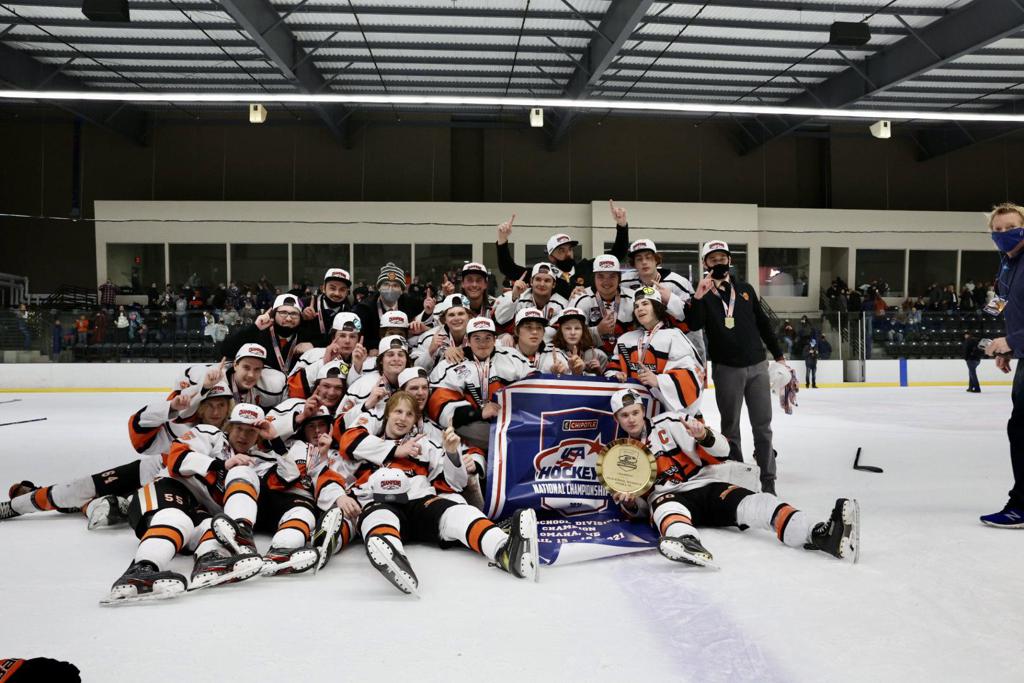