MARLBOROUGH, MASS. – Clusters of track-suited girls passed through the hotel lobby into the cool, damp air of a New England night. As they prowled for laughs or a late-night snack, Julianna Iafallo stretched alone in the fitness room, preparing for Day 2 of the 2014 USA Hockey-Toyota National Championships.

The novelty has waned for Iafallo. Now an 18-year-old, she’s played at the youth nationals five times without a championship. Twice her Buffalo Bison made the finals and twice they were defeated by Assabet Valley. It’s now or never in this, her sixth and final appearance before trading her Bison black-and-copper for Ohio State scarlet in the fall. Cherishing every moment with her long-time teammates, Iafallo is on a mission. She wants to win the title with them. Badly.

Yesterday’s tournament opener was a success. Buffalo topped the New Jersey Colonials, 6-4, which helped the Bison keep pace with Shattuck-St. Mary’s in Pool C. Later, Iafallo embarked on her evening stretch, and today she became the first 19U player to register a five-point tournament game, pacing Buffalo with three goals and two assists in an 8-1 win over Team Wisconsin. That set up a battle for first place in Pool C tomorrow with Shattuck-St. Mary’s, also undefeated after two games. From there, final standings will be tabulated and quarterfinal seeding assigned.

“We worked hard through the whole season, and everyone wants this so bad,” said Iafallo.

A left-hand shooter like her brother, Alex, who skates at the University of Minnesota Duluth, the youngest hockey-playing Iafallo learned the game as a family tradition. Her dad, Tom, played and coached, introducing his children to the sport and then helping with their youth teams.

“Once Alex got involved, it always looked like fun,” she said. “I tried every sport, but hockey was my favorite, so I stuck with it.”

The rest is history. And now Iafallo is trying to add one last chapter to the story. 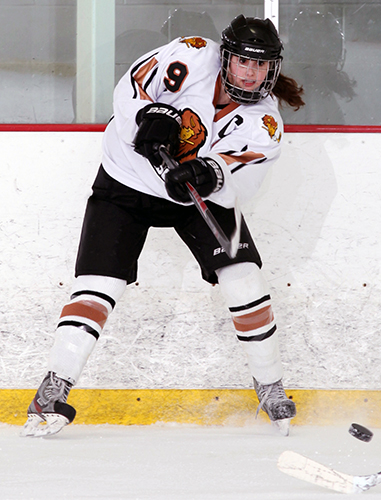