Legree goes out a champion in final season behind the bench

Legree’s Sioux City Metros sent him out on top.

Drake Beller had a goal and assist, including the game-winning goal in the third period, as Sioux City came from behind to beat BHC Monarch from Colorado 3-2 in Monday’s Division 2 championship of the Chipotle-USA Hockey High School Nationals in Plymouth, Minnesota.

“100 percent,” Beller said of trying to give Legree a championship in his final year. “If you’re going to go out, this is the way to do it.”

“It’s always special when you can go out on top,” Legree said. “Whether we went out on top or not, it was time for me to move on. It’s been fun and this is a very special group of kids. I’m very proud of all of them, just their work ethic.”

Adam Burtzlaff and Yuta Young each scored for Monarch, which also finished in second place in the high school tournament in 2016. Reese Kelly made 15 saves.

“I thought we played well the whole game,” Monarch coach Jimmy Dexter said. “I think we just couldn’t bury our chances. We had great scoring chances and the puck wouldn’t go in.”

Monarch beat the Metros 8-1 during the pool play portion of the tournament and appeared on their way to another lopsided score when Burtzlaff scored just 2:45 into Monday’s title game.

Young gave Monarch a 2-0 lead midway through the first before Sioux City turned the momentum.

McDonald scored with 4:35 left in the first with assists to Connor Sandoval and Chase Lewison.

Page scored the tying goal late in the second when he was able to poke a puck past Kelly during a scrum in front of the net. Drake Beller, who led the team in scoring during the season, added the game-winner on a rush with a quick, blocker-side wrist shot from the top of the circles.

Blake Beller was tested plenty in goal late. He made one point-blank save – a true game-saver – with two minutes left to maintain the lead.

“Last game wasn’t a very good one; let in a lot of weak goals,” Blake said of the first matchup with Monarch. “This one, the team just bounced back and we went out there and got the job done.”

Both teams were 0-for-3 on the power play, but BHC Monarch had a 29-18 advantage in shots on goal.

“The 8-1 was everything lined up right, I think,” Dexter said. “They’re really good. I said when we played them, ‘I wouldn’t be surprised if we see them again in the final.’ We got some bounces and it definitely wasn’t an 8-1 game. Today we couldn’t get a bounce.”

The bounces went the Metros way this time and gave Legree a championship sendoff after three decades of hockey in Sioux City. Legree, who once was in pro camp with the Minnesota North Stars, ended up in Sioux City when his playing career as a minor leaguer ended in the city.

He coached Sioux City’s players for the final time on Sunday, ending a span where he coached eight of the seniors since they played 12U hockey.

“I have two grandchildren I don’t see all winter,” Legree said. “I think I need to step back…I retired from hockey when I was 25 and I’ve been in hockey my whole life. I’m 62 years old, I’ll be 63 in May, so it’s in my heart, but the time is right.” 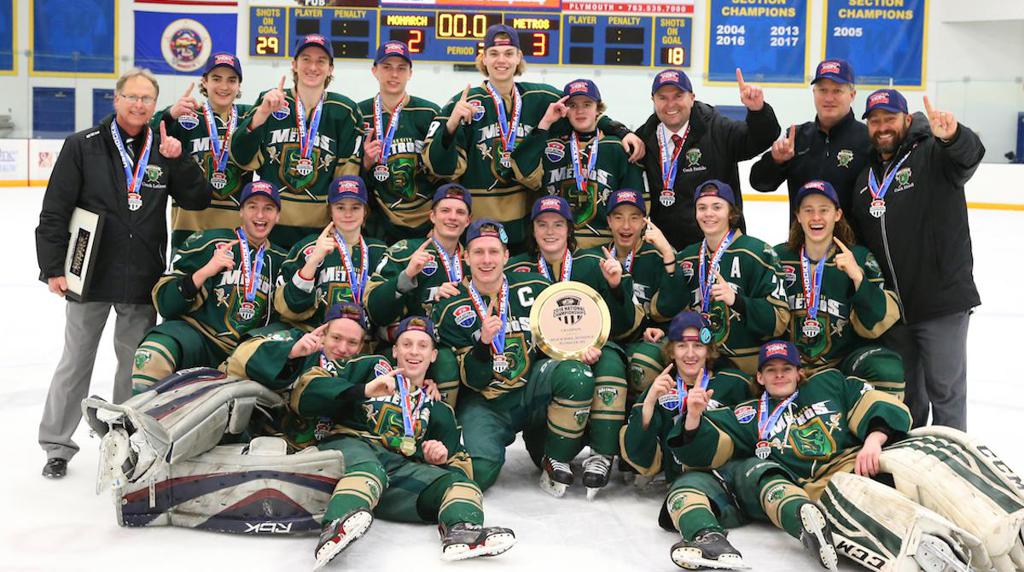